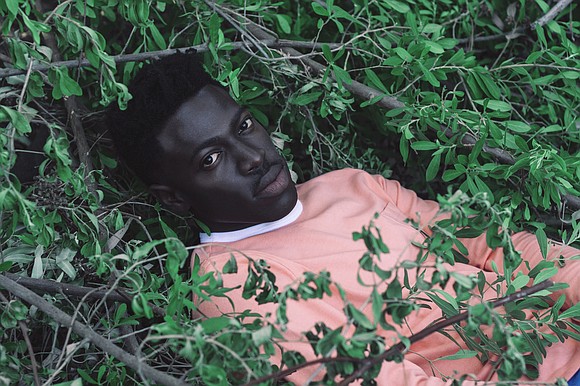 The mysterious and sultry folk soul singer/songwriter Moses Sumney has released a new single in anticipation of his debut full-length album, whose title has not yet been announced. His newest single, “Doom,” is an angelically surreal track that boasts fatalistic lyrics. The track is accompanied by a music video directed by Allie Avital in which Sumney is singing submerged in murky blue water. He floats, appearing weightless and burdened at the same time, as he sings, “Am I vital if my heart is idle?/Am I doomed?”

“Doom” arrives as a follow-up to a collection of EPs and singles that Sumney has been dropping like breadcrumbs toward the grand gesture of a full-length album since 2014. He is and has been a very active touring musician since the inception of his career, etching out a very solid corner of the Black folk, soul music genre, but his versatile voice and minimal musical ornamentation have allowed him to tour with diverse acts such as the Yeah Yeah Yeahs’ Karen O., Vince Staples and the British pop soul star James Blake.

Sumney announced on his Facebook page that he will be releasing his upcoming album with the independent label, Jagjaguwar Records, but did not share the album’s title. Sumney is elusive and seduces his audiences with his silky gospel soul falsetto vocal style draped over an electric guitar that whistles and swarms your eardrums with hypnotizing, yet

Sumney will be performing in New York at Prospect Park Bandshell in Brooklyn Aug. 11 and at the Music Hall of Williamsburg Oct. 11. Seeing this bright emerging musician perform live is highly recommended; his music and stage presence is sincerely captivating.

“Doom” can be heard on Spotify, Itunes, YouTube and Soundcloud.