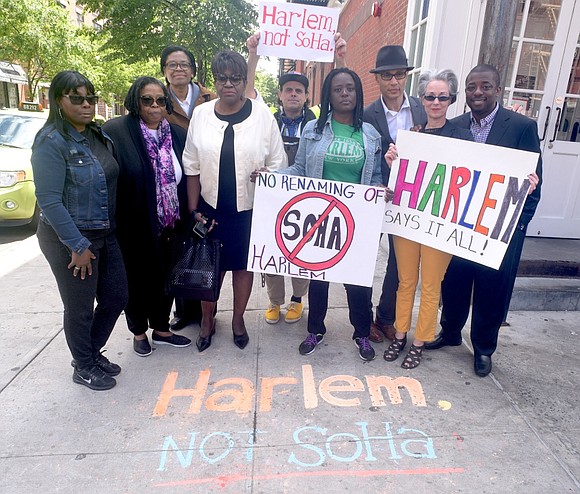 It looks like the battle to rename Harlem south of 125th Street “SoHa” is coming to an abrupt end.

Reports indicate that real estate firm Keller Williams is heeding the call of the community to stop using the term to attract new residents to the already heavily gentrified neighborhood.

A Google search of the word “SoHa” turns up negative press about the term being used. The Keller Williams Facebook page has yet to fully change the name of its team as of Wednesday afternoon.

Harlem resident Regina Black Middleton said that she questions how people can come into a neighborhood and simply rename it.

“If you are ashamed of your history that’s on you, but I and many others are proud of being Black regardless of our various skin tones,” she said. “I am proud to live in Harlem and will fight to maintain Harlem’s name and to make sure there’s affordable housing, rental, co-ops, condos and ones for those who are unable to afford what’s being built in our community now.

Newly-elected New York State Sen. Brian Benjamin wanted to put a stop to the “SoHa” rebranding of his neighborhood. Last Friday, Benjamin announced the introduction of a bill hitting back at realtors, retailers and developers looking to rebrand the stretch of Harlem going from West 110th Street to West 125th Street. Benjamin’s legislation would make it harder to change a neighborhood’s name.

Before being elected to the State Senate, Benjamin was chair of Community Board 10, which launched a campaign to stop the use of the name. Residents feared Keller Williams and others were erasing Harlem of its Black history.

With chants of “SoHa! Hell No!” while standing on the corner of West 115th Street and Frederick Douglass Boulevard, elected officials, activists and advocates stood with Benjamin to call for legislation that would penalize those who use the SoHa name. Standing near the slogan “Harlem Not SoHa” written on the sidewalk in colored chalk, the state senator outlined his plan. “This bill, if passed, would mandate the city to take action to create a process for doing what we’re asking for, which is to make sure that traditionally recognized neighborhoods’ names are not changed,” said Benjamin. The legislation would feature the community in the renaming process and create a framework for the city to create its own process. “When you first meet someone, the first question you usually ask them is ‘Where are you from?’” Benjamin said. “And I can tell you that the majority of us from Harlem say that we’re from Harlem. Now, if you live in Queens, you might live in a certain neighborhood but you say you’re from Queens. If you live in Brooklyn, you might live in a certain neighborhood but you say you’re from Brooklyn. But we in Harlem say we’re from Harlem, not Manhattan.” The legislation could face a First Amendment challenge from businesses who want to use the SoHa name for marketing purposes. Benjamin said he just wants a bill in place but wants to leave the details to City Hall and the community to work out. “If any name changes are gonna happen to this neighborhood, they are gonna have to be a part of the conversation,” said Benjamin. Former Congressman Charlie Rangel shared Benjamin’s sentiments about the Harlem name while providing some personal history. “Harlem is not a name,” said Rangel. “Harlem is something that we have inherited. Harlem is the dreams and aspirations of people who came here from slavery…who came here from the South. Harlem is where our artists, our entertainers, our poets and our mentors have come. “When I joined the Army, they didn’t say I was the kid from New York,” continued Rangel. “I was from Harlem. When I went to the Assembly, I was the guy who represented the Harlem district. And for 46 years in the Congress, I had to tell them that the district was wider than just Harlem. But everywhere I went? ‘That’s the guy from Harlem.’ This term doesn’t belong to me. This term doesn’t belong to us. This belongs to those who have struggled.” New York City Council Member Bill Perkins said that it’s up to the people to decide the name and not businesses and developers. “This is Harlem forever, until we decide something else,” said Perkins. “It’s almost a Ku Klux Klan-styled attack on a neighborhood. It’s an insult to legacy and history of somebody like Charlie Rangel who is an icon…who represents Harlem.”