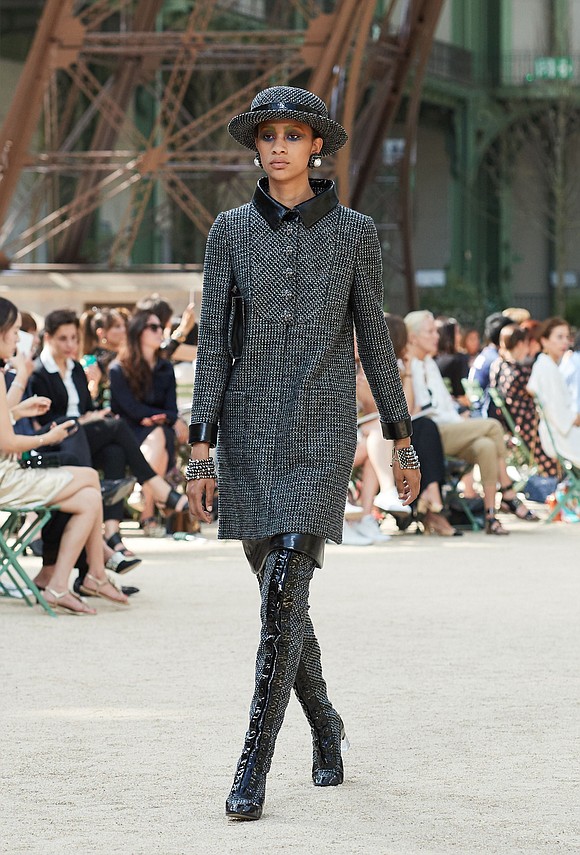 At Chanel’s fall/winter 2017/2018 haute couture presentation in Paris, the atmosphere was luxurious, yet delightful. The show was presented in a garden under the glass roof of the Grand Palais, located at the foot of a 38-meter-high replica of the Eiffel Tower. Built for the 1889 Exposition Universal as a symbol of the industrial age, the tower has become Paris’s most iconic monument. Chanel’s collection is opulent! The clothes are inspired by Parisian style.

“It’s all about shape, cuts and silhouettes,” stated the collection’s designer Karl Lagerfeld. “It’s a vision of a revived Parisian woman.” For fall/winter, Lagerfeld selected this venue with its impressive décor to deliver his vision of graphic elegance, which suited his presentation. Silhouettes incorporated clear lines that were either long and tubular or flared into an A-shape and cinched at the waist. For daywear, Lagerfeld combines his designs with precision and rigorous cuts. His sophisticated materials include notable tweed, mohair and wool. In the collection, terrific tweed jackets are cropped and, often, double-breasted. Some of his jackets offer a close-to-the-body fit, looking like a long tunic. Other toppers are shown with dome or wrap-around skirts, tube dresses or jumpsuits.

Oversized coats were dramatically designed and very shapely. Frock coats were styled with fitted waists and peplum jackets. The wintery palette of black, gray, navy blue, Bordeaux and green heightened the play of volume and proportion. There was also subtle shading and checked wools that added to the designer’s fabulous looks.

For eveningwear, stunning silhouettes were pure and precisely cut. These styles were exquisite. Some shapes were embellished with embroidery or feathers—chiffon, silk tulle or a new double-faced satin that brought out the beauty of the lines. Luxurious night dresses were long and straight. In this segment of the show, there were gorgeous pieces. The audience was in awe just watching one beautiful piece after another. Sexy sheaths featured soft draping. The little black dress with sequined netting should be in every woman’s closet. Other stunning dresses featured pleated tulle underskirts and peplum bustiers. His shimmering sequined dresses were enhanced with cubist motifs. Whispery feathers were treated like fur throughout the collection.

In 1915, Chanel was founded in Biarritz, and it was established in 1918. It is the longest standing haute couture label that’s still in operation. Thinking back before haute couture, this art form of design was simply called tailoring. In those days, fashion houses custom created outfits that were made to order for their clients. The first haute couture fashion house opened on the rue de la Paix in Paris in 1858. However, fashion and the way fashion was produced changed. Couturiers no longer made clothes to measure for their clients. They began to design their own clothes and sell their own designs to their clients.

In the following years, several design companies opened, making Paris the city where “the whole world comes.” To this day, this uniquely French expertise offers a guarantee of excellence and creativity that has grown to enhance the city’s reputation worldwide.