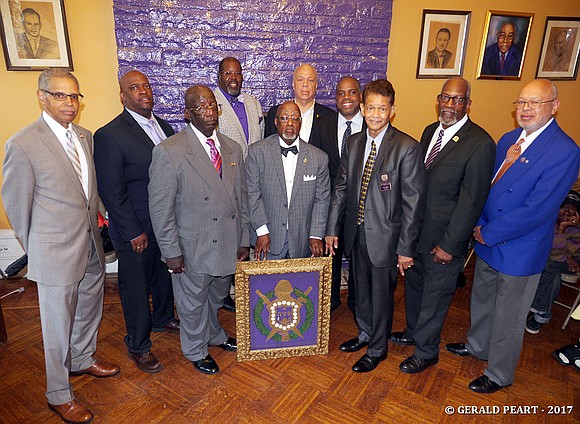 Since 2009, Harlem’s Kappa Omicron Chapter of the Omega Psi Phi Fraternity has committed to help the homeless and veterans who go without assistance and support. To date, the fraternity has raised more than $25,000 in their efforts.

The chapter’s Food Pantry Project was started by longtime members Coach Ray Haskins and Thomas Wallace, after they noticed long lines of people in need of assistance. With the help of other chapters, what started out as a local venture has now gone citywide to five boroughs.

Wallace stated, “We are proud of our veterans who have served with honor in spite of adversity. Many are homeless and without jobs despite their service to this country. We hope it will bless them and their families.”

Along the way, the chapter has recognized those organizations that have continued their commitment to the community and its people with a Gift Giving Award of $1,000.  Five awardees for 2017 are Black Veterans for Social Justice—Brooklyn; Bronx Salvation Army—Bronx; Convent Avenue Baptist Church—Manhattan; St. Albans Congregational Church—Queens; and Stapleton Union American Methodist Episcopal Church—Staten Island.

A special “Thank You” to Steve Schmidt, Chapter Basilues, whose tireless efforts keep everything on point with the food pantry donations and donor contributions.