Liberty return to NY stuck at .500 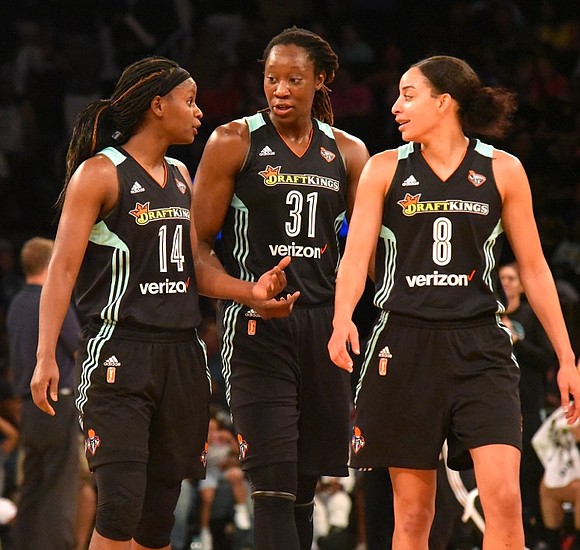 It was the night that the Phoenix Mercury retired the jersey of Penny Taylor and the players were determined to head into the postgame ceremony with a win. Also, wanting to avenge a loss to the New York Liberty in Madison Square Garden in early June, Diana Taurasi, Brittney Griner and former Liberty guard Leilani Mitchell turned up the heat, defeating the Liberty 81-69. This loss put the Liberty at eight wins and eight losses for the season.

All was not bad on this four-game road trip. The Liberty pulled out a 79-70 win over the Seattle Storm. In the win, Tina Charles posted her seventh double-double of the season and became the Liberty’s all-time leading rebounder. With 13 points and 11 rebounds, Kia Vaughn posted her first double-double of the season. With Charles from Queens and Vaughn from the Bronx playing so well, Brooklyn’s Epiphanny Prince would not be left out. She contributed 16 points and four rebounds.

Coach Bill Laimbeer was pleased with the team’s effort from start to finish. Although the Liberty was behind in the first quarter, no one lost composure. With patience and good defense, the players stayed in the game until they turned things around.

“You want to feel good, especially with the All-Star break approaching,” said Charles. “There was a certain way that we played today—with energy and great effort. Everybody that stepped on the court contributed and showed what their strength is. We want to keep that rolling.”

Unfortunately, that didn’t happen in Phoenix. Griner poured in 31 points and pulled down 13 rebounds. Taurasi, who is married to Taylor, contributed 19 points and five rebounds. Guard Danielle Robinson, in her first season with the Mercury, put in 10 points and six assists. The Liberty trailed by as much as 15 points in the first half. Although New York played better in the second half, the Mercury sustained its lead.

The Liberty return to Madison Square Garden for three games: Friday, Sunday and Wednesday. After the All-Star break, it’s on the road again for five games. Although the Liberty remains in playoff contention, at present this team doesn’t look like a championship team. This roster has talented players with hometown connections, but the players have to find more cohesion and confidence going forward.