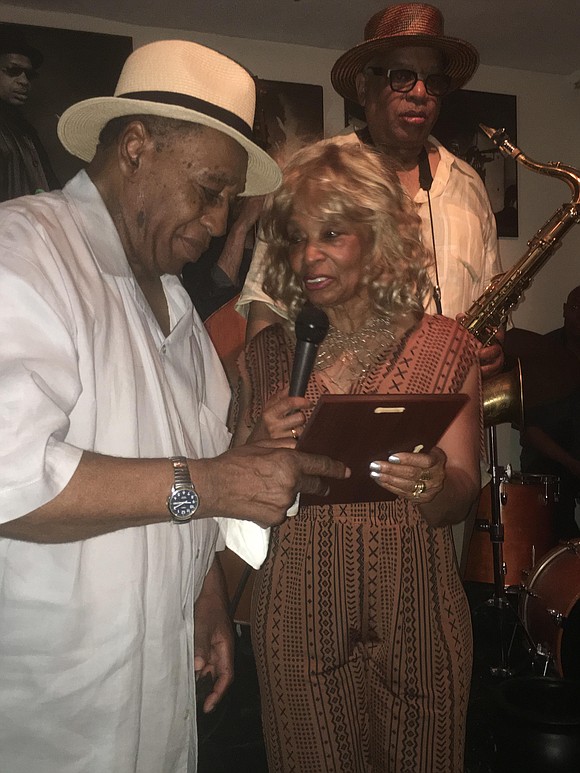 When you attend a concert of the multireed player and flutist Rene McLean, his music will ascend the boundaries of the hard bop American tradition. Because he has researched the traditional music of South Africa and Japan, his music sports a universal overcoat that speaks multiple languages.

July 15 Rene McLean and Music of the Spirit will bring its universal force to Brooklyn’s Sistas’ Place (456 Nostrand Ave.). No need for translation booklets. Just a set of human speakers will keep you swinging on the edge of your seat and dangling in the realm of great music that crosses all barriers without political permission, only a passport of the heart.

The competent musicians making up Music of the Spirit are pianist Hubert Eaves, bassist Nat Reeves, drummer Carl Allen and Yacouba Sissoku on the kora, a 21-string lute-bridge-harp used in West Africa.

McLean noted aside from standards and his originals, they will play compositions from his latest CD, from a 1984 live radio broadcast at Whippoorwill, due out next week.

The Whippoorwill was a refurbished jazz club and restaurant located downstairs in an old building on East 18th Street during the mid-1980s.

The jazz vocalist Joan Belgrave and her sextet perform for one night only, July 17, at Dizzy’s Club Coca-Cola (60th Street and Broadway).

Belgrave, who has been residing in New York for a brief period is still a true Detroit native. The “Motor City” has a long history of blues, R&B and jazz from Motown and her late husband, the great trumpeter/educator Marcus Belgrave, who mentored so many along his distinguished path.

Once the smoke clears from Independence Day, better known as the Fourth of July “charade” or “farce” (That independence didn’t cover Blacks. They remained slaves under the watchful eye of their terrorist masters.), an honest celebration begins as Jazzmobile hits the neighborhood with music that will make you dance, swing to the beat and feel the truth.

The Summerfest, as it is called, is a continuing cultural legacy that began in 1964. NEA jazz master, pianist, composer and educator Dr. Billy Taylor and philanthropist and arts administrator Daphne Anstein were the founders of Jazzmobile.

The Summerfest featuring some of the best jazz musicians on the scene runs now through Aug. 30. A short list includes the vocalist Lynette Bell, with music director Dennis Bell, July 13 (7 p.m.-8:30 p.m.) at Harlem River Park “Jazzmobile on the Beach.” The Entrance ramps are located on Madison Avenue/East 135th Street and Fifth Avenue/139th Street.

The following evening the vocalist with a flair, Lezlie Harrison, performs at Marcus Garvey Park (18 Mt. Morris Park and West 124th Street). Harrison offers an eclectic repertoire that swings from soulful Stevie Wonder to Marvin Gaye’s “What’s Going On,” or the jazz standard “Straight No Chaser.”

Her reconstructive versions take listeners down another road. She connects with the audience via the sassy humor that propelled Pearl Bailey to prominence. The show is 7 p.m. to 8:15 p.m.

The saxophonist Antonio Hart performs at Grant’s Tomb (122nd Street and Riverside Drive) July 19. As a protégé of the great Jimmy Heath, his musicianship is outstanding.

The tenor and soprano saxophonist Antoine Roney makes an appearance at Grant’s Tomb July 26 (7 p.m.-8:30 p.m.). He is a graduate of the Hartt School of Music of the University of Hartford, and he studied under the legendary Jackie McLean.

His schooling with McLean left a fast stream of hard bop rhythms running through his veins, and as a native of Philadelphia (John Coltrane’s and Sonny Fortune’s hometown) it inspired an exploratory spirit.

As a mentor of young musicians, for this performance Roney will be accompanied by a younger than age 20 ensemble. One of these young musicians is his son Kojo, who in my opinion is already jamming like a young Elvin Jones on the drums. If you want to see where jazz is headed, this gig is the one to make.

The club is a New York City historical landmark. During prohibition in 1927, there were at least 20 clubs or speakeasies on West 133rd Street (between Lenox and Seventh avenues). Most were after-hours joints where people went after the Cotton Club and other spots in Harlem that at the time were segregated (no Black folks allowed).

However, on 133rd known as “Swing Street” or Jungle Street,” depending on where you stood, musicians, socialites and hip Harlemites all squeezed into the same joints. Bill’s Place was

The stride piano style was in full force, with its house musician Willie “The Lion” Smith and a young Billie Holiday making a reputation by mesmerizing newcomers.  It later became Tillie’s Chicken Shack, serving the best chicken and waffles in the city.

Dr. Theda Palmer Saxton presented Earl Spain with an award for his longtime commitment to St. Nick’s Pub when he was the manager. Bill Saxton gave a special shoutout to Berta Alloway for her many years of dedication and ongoing commitment to promoting jazz in Harlem.

“For the future I’m going to keep playing music and working with young musicians,” said Saxton. “I was so thankful for the outpouring of love during my birthday celebration.”

He began the week with his reliable trio that includes guitarist Johnathan Kreisberg and drummer Johnathan Blake. They steamed through originals such as “Mr. Night,” an easy moving ballad that transformed into a pronounced blues theme, to Paul Simon’s “50 Ways to Leave Your Lover” that quickly became a

He concluded the last few days of his engagement with a hard-hittin’ octet that included his trio plus baritone saxophonist Jason Marshall, tenor saxophonist John Ellis, trumpeter Sean Jones and trombonist Robin Eubanks. “I Didn’t Know What Time It Was” included Dr. Smith’s synthesizer and programmed strings from his Apple. It was the long, soulful version only heard from

the master’s Hammond B3.

Dr. Smith introduced the impressive vocalist Alicia Olatuja. All four of his daughters, as well as a few great-grand and grandchildren, came out to celebrate his birthday. His performances were recorded for a live Blue Note Records release.

“Man, I am having a real ball,” said Dr. Smith. “I am so happy my girls and grandchildren made the trip to see me play. I don’t feel any different,

so I’m just going to keep on playing.”