The Basketball Tournament lands in Brooklyn for Super 16 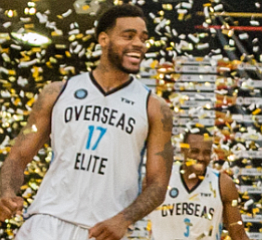 The Basketball Tournament lands in Brooklyn for Super 16

Since its inception in 2014, The Basketball Tournament, also known as the TBT, has been a compelling and viable alternative to longstanding traditional summer basketball leagues. With a winner-take-all, $2 million prize awarded to the eventual champion, the TBT has drawn widespread interest from elite players and fans alike, as its formidable caliber of competition has led to a yearly increase in live attendance, as well as an uptick in television and streaming viewership on ESPN platforms.

Every team is composed of players with NBA, professional or D-1 college experience. The tournament has deep New York roots from players to venues, as the 2015 and 2016 semifinals and finals were held at Fordham University in the Bronx. This year, those games will take place at Coppin State University in Baltimore Aug. 1 through Aug. 3.

Yet, New York remains a prominent location for TBT games as Brooklyn’s Long Island University will host the Super 16 round and Regional Championships begin tonight at 5 p.m. The Northeast region’s top-seeded FCM Untouchables will face the No. 4 seeded Team F.O.E. followed at 7 p.m. by No. 3 seeded Boeheim’s Army going against the No. 7 seed, Team Fancy.

The Untouchables are led by former St. John’s University standout Marcus Hatten, who continues to enjoy a prosperous career playing professionally in Europe. Team F.O.E is guided by NBA twins Marcus Morris and Markieff Morris, who are currently key role players for the Boston Celtics and Washington Wizards, respectively. Marcus is the coach of F.O.E. and Markieff the team’s general manager.

“It’s excellent competition and teams have a lot to play for,” Hatten said last month before the start of the TBT. “I’ve known and or played against many of the guys who are playing in this tournament for a long time. So I know how hard it is to move through the brackets.”