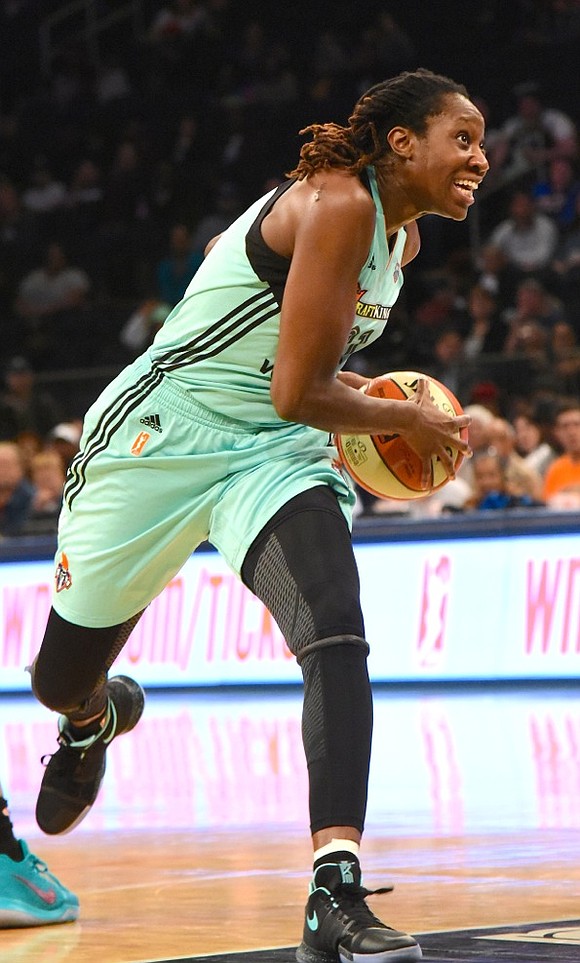 Several players referred to it as getting a monkey off their backs. After a rough, disappointing home court loss to the Chicago Sky last Friday, the New York Liberty took to the court at Madison Square Garden Sunday afternoon with intensity, purpose and cohesive attack. The end result was an 85-55 win over the Washington Mystics.

“Everyone in this locker room got into the WNBA for a reason,” said Tina Charles, who gladly played less than 20 minutes in the win. “We all trust in them. I’m happy to see everybody elevating their games.”

The high scorer in the win was Bria Hartley, who started at the point guard position. Sugar Rodgers came off the bench for 14 points. Guard Lindsay Allen, forward Nayo Raincock-Ekunwe and guard Shavonte Zellous were all substantial contributors.

“I felt we had more energy today,” said Allen. “We came out strong. The people who came off the bench were playing really well after the starters started out great getting that lead for us. Just a great game all around.”

Allen said a key to sustaining the momentum is to continue to play with energy and joy. Raincock-Ekunwe said effective communication is key moving forward. Every time they enter an arena, they have to have the same positive state of mind.

“If we always put that effort, we should be OK,” said guard Epiphanny Prince.

Center Kia Vaughn said the game provided the players with a release and got everyone more confident in their shooting. It also helped the players understand that they can share the load with Charles. Visualization is key. “Mentally seeing the ball go in helps a lot,” she said.

“Our new focus is what we’ve always wanted—to push the ball, run,” said forward/guard Rebecca Allen. “That’s how we started the game. With that energy, it’s pretty hard for teams to stay with us. So if we continue locking down teams defensively and playing at this sort of speed, it’s pretty good.”

The Liberty played a camp day morning game at Madison Square Garden against the Connecticut Sun Wednesday. After that, Charles headed to the All-Star Game in Seattle and the rest of the team has a little break until the team gathers in Minnesota Sunday to start a five-game road trip.