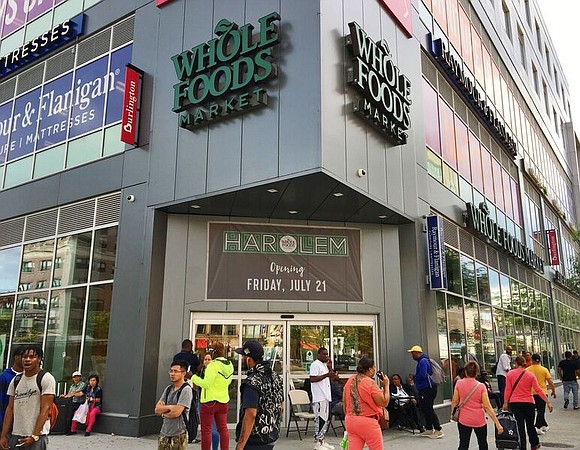 In an interview with the Amsterdam News, the supermarket’s general manager, Damon Young, enthusiastically described what Whole Foods could bring to Harlem. “For us it’s the excitement of jobs for the community, [bringing] fresh, high-quality food and a tremendous partnership for a lot of the local vendors ... really getting them some good exposure directly from the community into the store,” he said.

When asked about why Harlem had been chosen to be the location of a new Whole Foods supermarket, Young said that Harlem was always a neighborhood that Whole Foods was interested in and that the supermarket chain just wanted to “really service the needs of that community.”

“I mean, look around, I don’t think there’s really any place to get great, quality organic or natural food at a great price,” said Young. “So I think we're servicing the needs of the local customers.”

According to an official Whole Foods fact sheet, several organizations, such as Harlem Children’s Zone and the Harlem YMCA, are in community hiring partnership with Whole Foods. There are also approximately 20 local Harlem brands that’ll be featured on opening day, such as spices and rubs from Sylvia’s.