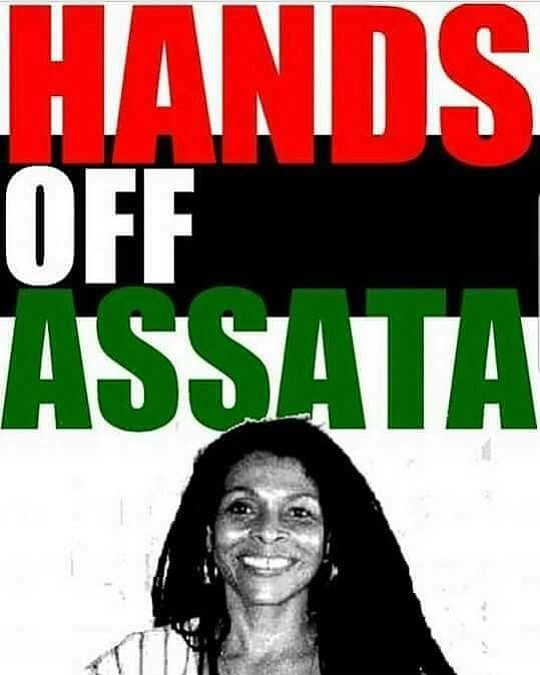 A contingent of grassroots activists, artists, admirers and comrades of exiled political refugee Assata Olugbala Shakur came together Sunday, July 16, at Newark’s REFAL Center (271 S. Ninth St.) to acknowledge her with “For the Love of Freedom: Assata Is Always Welcome Here—An Honoring of 70 Years of a Committed Life,” hosted by the N.J. Black Panther Party Commemoration Committee.

The audience chanted “Assata is welcomed here!” in unison to open the event.

Moderator Zayd Muhammad began the program by pouring libations, acknowledging the great heroes and sheroes who sacrificed their lives in their struggle for liberation from U.S. government-sponsored genocide, imperialism and tyranny.

“What happened to her is a prime example of the length that the government was willing to go to destroy the Party,” he noted. “The fact that she survived her incredible ordeal and was able to secure some semblance of freedom, albeit exiled, is a testimony to the spiritual will of our people to survive the worse expressions of oppression and to be free.”

He then recounted the events that occurred on the N.J. Turnpike the night of May 2, 1973, which led to the shootout that caused the serious wounding of Shakur and deaths of fellow Black Panther Zayd Shakur and a N.J. State trooper when Zayd Shakur’s car was pulled over after being racially profiled by the troopers.

Shakur and co-defendant Sundiata Acoli, who was also in Zayd Shakur’s car, were charged and later convicted of the trooper’s death and sentenced to life plus 30 years.

After surviving six and a half years in N.J. prisons, Shakur was sprung free from the maximum security wing of the Clinton Correctional Facility for Women in New Jersey Nov. 2, 1979, allegedly by her Black Liberation Army comrades.

After navigating under the radar for a few years, she resurfaced in Cuba after being granted political asylum by the Caribbean country’s president, Fidel Castro.

During Sunday’s event, several of Shakur’s Panther comrades were present and recalled how she tirelessly helped feed and educate the poor Black communities before her capture. They contended that’s why she was targeted by COINTELPRO. They also thanked the Cuban government for supporting the revolutionary mother hen of the Black Liberation Army.

Two of Shakur’s comrades called in to wish her a happy birthday—first, Dhoruba bin Wahad, then Acoli, who is now 80 years old and still incarcerated. Amiri Baraka’s widow, sister Amina, was present.

African dance, drumming and poetry readings followed, and then the traditional singing of happy birthday, as well as the Stevie Wonder rendition and finally the cutting and distribution of the vegan cake.

“Hands off Assata Shakur, free Sundiata Acoli and long live the panther spirit of Zayid Malik Shakur” was one of the chants. Shakur states in her autobiography, “No one is going to give you the education you need to overthrow them. Nobody is going to teach you your true history, teach you your true heroes, if they know that that knowledge will help set you free.”