Walter Welsh guides IExcel to the top of girls’ basketball 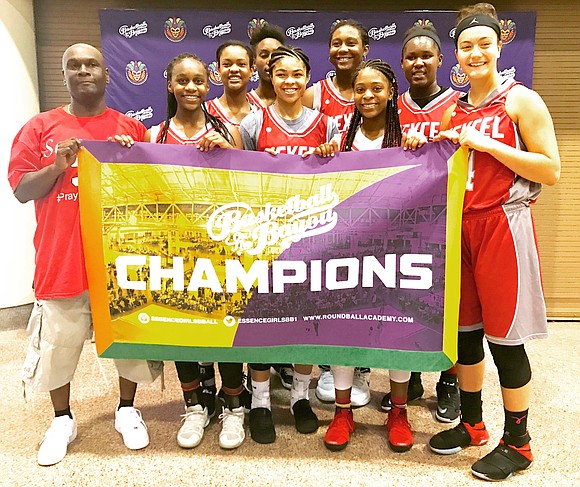 The passion emanating from Walter Welsh is unmistakable. It resonated through the phone as he spoke with this reporter from New Orleans Tuesday night, less than an hour before he boarded an airplane to Atlanta.

Earlier in the day, the girls’ basketball program for which he is the founder and director, New York City-based iExcel, claimed the title in the U17 Division of the 15th annual Basketball on the Bayou tournament held at the Ernest P. Morial Convention Center.

“I can’t say enough about how focused and committed they were in this tournament,” Welsh said of his players. “I could tell from the outset they really wanted this one.”

Less than 48 hours later, Welsh and iExcel will begin their quest for another first place showing, this time at the National Championship, which begins today (Thursday) at the Georgia World Congress Center in downtown Atlanta.

In addition to the U17 squad, the program’s freshman team, coached by former University of South Florida standout Tiffany Conner, as well as the sophomore team, steered by Zeta Martin, will also be seeking titles in their respective age groups. But it is the U17 contingent that will rightfully garner the most attention. They are led by Harlem’s Jordan Nixon, one of the nation’s best high school point guards, who will enter her senior year in September at the Mary Louis Academy in Queens with offers from Notre Dame, UCLA and a number of other elite college programs.

The team also boasts 6-foot-4 rising junior Aliya Boston from Worcester Academy in Massachusetts. Boston, who is from St. Thomas, U.S. Virgin Islands, solidified her standing as one of the most sought after recruits in the class of 2019 after earning tournament MVP honors this past June for the gold medal-winning USA Basketball contingent at the 2017 FIBA Americas U16 Championship in Buenos Aires, Argentina.

Despite deflecting credit to his players and staff, Welsh is undeniably the accelerant of iExcel’s ascendance to the upper class of girls’ AAU basketball. He founded IExcel four years ago, having previously been a co-founder of the Ring City program with former NBA player Ron Harper before moving on to coach for the renowned New York Gauchos.

The list of notable ladies who have played for Welsh in his three decades of coaching women’s basketball includes Harlem’s Bethany Donaphin, a Stanford grad and former member of the New York Liberty; Keisha Hampton, currently playing for the Chicago Sky; Matee Ajavon of the Atlanta Dream; Pietra Gay, an alumnus of John Jay High School who won a WNBA title with the Houston Comets; and Niesha Butler, the erstwhile Georgia Tech star who was the all-time leading scorer in NYC basketball history at Riverdale Country Day Prep in the Bronx.

However, it is Caritas Henry who compelled Welsh, a product of the Coney Island section of Brooklyn, raised alongside the famous Marbury basketball clan, to coach girls’ basketball. “I remember Stephon when he was only 2 or 3 years old running around,” Welsh said with a chuckle.

“I was the director of the PAL Miccio Center in Red Hook [Brooklyn] coaching boys’ basketball in the early ’90s,” he recalled. “I was assisting the PAL staff at Martin Luther King High School with various programs, and one day Caritas, who was a student at MLK and played for their girls’ team, asked me to coach the girls [during the summer]. “That’s how I got into coaching girls’ basketball.”

Welsh continued, “Over the years, I’ve told my players, ‘it’s Caritas who has been directly and indirectly responsible for our journeys together.’”

Henry ultimately earned a scholarship to LSU and was the first player Welsh coached to play professionally.

With all the success his players have experienced on the court, Welsh, who serves as the director of program operations for the Greater Ridgewood Youth Council in Queens, emphasized his most gratifying and meaningful achievements have been helping a multitude of young women develop as leaders beyond basketball.

By that measure, Welsh’s record is nearly unblemished.