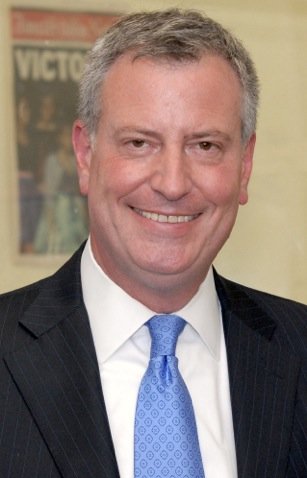 “It’s wrong for somebody to work full time in this nation and have to choose between a MetroCard and a phone bill,” said Henry. “That is the essence of the Fight for $15 movement because we are not gonna settle until every city in this nation wakes up like New York City has done and recognizes the power of people coming together and recognizing fairness in our economy.”

“This is about making sure our laws reflect our values,” said James. “We must not allow any force—any forces—in Albany to step in and pre-empt the City Council. We cannot allow any force in Albany to weaken the protections for working people in this city. So we’ve got to say it loud and we’ve got to say it clear. We’ve got to stand and step up and state your declaration and your commitment to working people in the City of New York. And if you do not, then these coalitions, these unions and the working people of New York, of both the city and the state, will rise up.”

James concluded, “It’s all about working people in this city and state and that you must never forget.”