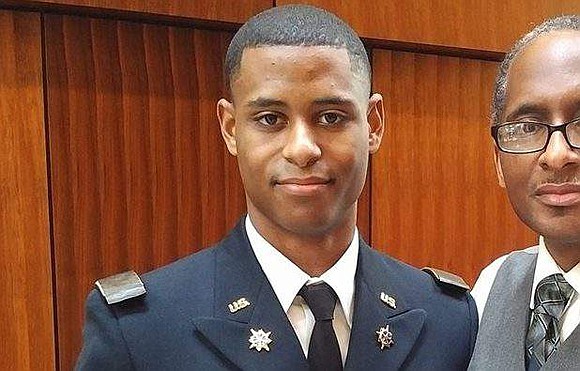 Families across the nation honored loved ones killed serving in the nation’s armed forces on Memorial Day. However, the family of Black Army Lieutenant Richard Collins III honored their loved one who was killed on American soil in a recent act of racial terrorism.

Funeral services were held for Collins Friday in Upper Marlboro, Md. Family and friends attended the funeral for the Bowie State University student who was slated to graduate last week. A gown was placed in the empty chair where he was supposed to sit at the school’s commencement ceremony.

Collins, 22, was stabbed to death May 20 by 23-year-old University of Maryland student Sean Christopher Urbanski, who is white. Collins was visiting friends at the University of Maryland when the bizarre incident occurred. Reports indicate that Collins was at a bus stop when Urbanski approached him and his friends. Urbanski said to Collins, “Step left, step left if you know what’s good for you” before stabbing Collins in the chest, killing him.

Urbanski was charged with first- and second-degree murder, as well as first-degree assault. He reportedly belonged to a Facebook group called “Alt-Reich” and previously made hateful statements about Blacks and other ethnic groups. The FBI is currently investigating.

In a statement, the NAACP condemned the stabbing, stating that Collins’ murder is one of many hate crimes spurred on by the racially divisive rhetoric associated with Donald J. Trump’s presidential campaign.

“When individuals occupying our nation’s highest office spew hate-filled rhetoric and unapologetically associate with and staff the White House with white supremacists, our entire nation drinks from the same poisonous well,” said NAACP Chairman Leon W. Russell. “We must continually speak out against the mythology of racism and its accompanying rhetoric and replace it with a message that unites us around justice and the truth.”

Black students at the majority white University of Maryland have been vocal about racial tension on the campus since the stabbing. Students have reportedly complained for years about racist flyers, hate speech and nooses on the campus.

After the stabbing, University of Maryland president Wallace D. Loh rolled out several action plans to help with race issues on campus, including allocating $100,000 for the school’s Office of Diversity and Inclusion, creating an annual report on all hate-bias incidents on campus and establishing a task force on hate-bias and campus safety.