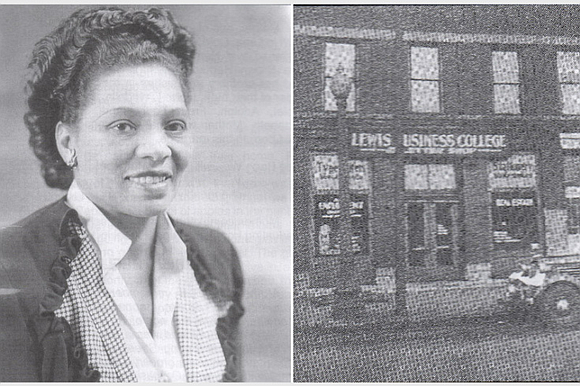 Whenever there’s discussion of historically Black colleges and universities, the mind drifts to the southern states. But there was one HBCU up north—Lewis College of Business. During a recent visit to Detroit, I learned too late to attend the funeral services for Dr. Marjorie L. Harris, who for 30 years was the president of the college. Harris died May 16, and her funeral was held 10 days later at Mayflower Congregational United Church of Christ.

If you are ever in Detroit, trek on over to John R. and Ferry Street and read the marker on the corner indicating the first location of the college. An even more important marker of the college’s legacy is Harris’ commitment—her lifelong dedication to an institution that flourished for 80 years before it closed in 2015.

The college was founded in 1928 by Dr. Violet Temple Lewis in Indianapolis, and she embarked on a mission to provide students with the same secretarial skills she had acquired while attending Wilberforce University in Ohio. She secured a $50 loan from a local bank, received rental space from her employer, purchased some used furniture with the loan, and eureka!—a college was born.

In 1939, Lewis was made aware of a similar need for secretarial skills in Detroit, and after a visitation and a serious study of the possibilities there, she opened a branch that soon outgrew the original one in Indiana.

While Lewis was conceiving the school, she also had to manage a household with two daughters after divorcing her husband. Phyllis was three years older than Marjorie, but they stayed united throughout their lives, so much so that they wrote a book about their mother, “On Her Own Terms.” “My mother was an honorable woman,” Harris told Bankole Thompson, editor of the Michigan Chronicle. “Someone needs to tell her story.”

Lewis’ story began in 1897 in Lima, Ohio, where she was born. After graduation from Wilberforce in 1917, she worked at Selma University for a year before a brief tenure as a bookkeeper for the Madame CJ Walker Company. From 1920 to 1927 she was employed at the Indianapolis Recorder. It was during these stints of employment that she noticed the lack of Black women as secretaries. That absence and the impact of the Great Depression motivated her to establish her own school in her home. Gradually, as cited above, she secured the means to move to a larger location and to serve more students.

In the beginning tuition at the school was $2.50 per week, and 20-25 students enrolled. Along with her teaching, she continued to hold down a full-time job. Always extremely creative, Lewis started her own radio program in 1932 to boost enrollment at the school. Her program “The Negro Melody Hour” made her the first Black radio announcer in Indiana. The success of the show increased her student enrollment and eventually became so popular that she branched out to other cities, including Detroit.

Wisely, Lewis began this venture in concert with key business leaders in the city. The Rev. William Peck of Bethel AME Church and head of the Booker T. Washington Business Association played a key role in getting her started in Detroit. She was ably assisted by the Housewives League, founded by Peck’s wife, Fannie. Members of the Church and the League conducted door-to-door campaigns for the school, insuring a substantial enrollment at the college.

In their book, the sisters recount how this collaboration worked. “Their specific goal and purpose was to help promote Black businesses. The officers of the Housewives League would meet with Black business, learn about their products, inspect the quality of products and services,” the sisters wrote. “These women would work in the neighborhood, knock on doors, and ask the community to support a particular Black business in their immediate community…and the Housewives League would try to close down a business if it was not reputable. They would knock on doors, pass out flyers and encourage the African-American community to boycott ill-reputable businesses.”

With the growing success in Detroit, Lewis closed the college in Indiana, thus giving her more time to concentrate on developing the curriculum and organizing the fundraising drives. In focusing on a variety of secretarial and bookkeeping skills, the college was a perfect conduit to job opportunities at the automobile companies in the city. For many years the college was a steady and reliable pipeline from school to jobs, and by 2003 more than 40,000 students had matriculated at the college.

When their mother died in 1968, the sisters took over the school, with Marjorie assuming the presidency, determined to carry on her mother’s pioneering work in establishing business schools for Black women. Marjorie extended her reach beyond the corridors of the college, becoming an influential civic leader and board member of a sundry of organizations and institutions.

“The college helped knock down the doors of racism in the hiring practices of governmental and corporate entities in the Detroit metropolitan area and changed the ethnic makeup of white collar workers,” recalled Lyndia Grant, Marjorie’s close friend.

Seeking further expansion, the college relocated in 1976 to the city’s northwest side, and in a consolidation move, campuses in Cleveland and Detroit were combined to the College of Business. Subsequently it became an accredited junior college. In 1987, it was designated an HBCU. Mirroring the city’s failing economy, the school experienced a precipitous decline in enrollment. The school lost its accreditation in 2007, which was a harbinger of doom. In 2013, the school was put up for sale and closed completely two years later.

It may no longer be of service, but during nearly a century of operation, Violet and her daughters did much to improve the employment opportunities of thousands of students, giving them the secretarial skills so vastly needed in the fast moving world of technology.