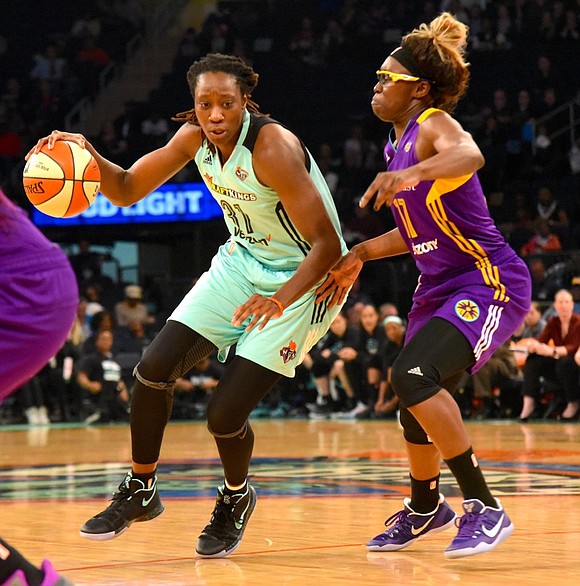 Three New York Liberty players scored in double figures and the bench played some solid minutes, but it wasn’t enough against the defending WNBA Champion Los Angeles Sparks. Candace Parker put up a double-double with 20 points and 11 rebounds, and although reigning league MVP Nneka Ogwumike got into foul trouble, her 22 points and seven rebounds were enough to lead the Sparks to a 90-75 win in Madison Square Garden.

The Liberty started strong and led through most of the first half, but the Sparks simply had more fire power in the second half. Liberty coach Bill Laimbeer gave Los Angeles credit for making good plays.

“Every time we seem to face adversity, we’ve got to get mentally stronger,” said Laimbeer. “We gave them too many easy-basket second shots. That can’t happen against a quality team. Until we decide as a collective group—coaches and players—that we become mentally tougher and actually execute what we’re supposed to every play, we’re going to struggle.”

Laimbeer said the players have to each find their individual confidence. To get there, the players have to put in the work. He is optimistic that rookie Nayo Raincock-Ekunwe will be a solid contributor, saying she brings great energy and exuberance to the game.

With this loss the Liberty go to 2-3 and the Sparks go to 3-2. Parker said after losing two tight games, the Sparks were in “desperation mode” to complete its road trip with a win. It was a happy homecoming for Sparks guard and New Jersey native Essence Carson, who played eight seasons with the Liberty.

“We had some lulls in the game, but that’s expected in the game of basketball,” said Carson. “What we did today was play some defense across the board. We were able to not only score baskets, but get stops.”

The Liberty returns to the Garden Friday against the Dallas Wings, and then takes on the Phoenix Mercury Sunday. The Liberty will be without guard Epiphanny Prince, who had 21 points against the Sparks. She heads to Europe to play with the Russian national team. Post player Kia Vaughn will be playing with the Czech team. Both nations are fighting to qualify for next year’s World Championships. As reigning Olympic gold medalists, the U.S. has an automatic berth.