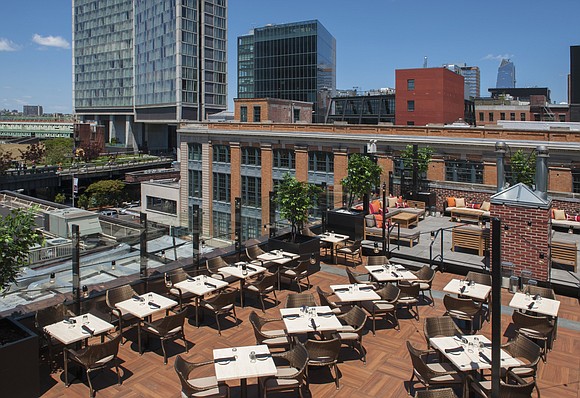 (CNN) -- There's something about being far above the hubbub of the Big Apple's streets, especially in the summertime, when

humidity levels soar and the concrete feels like it's emanating heat waves.

"Being on a New York City rooftop gives you this special pleasure of feeling part of the city, inside it, but at a distance," says Ray Chung, director of design at The Johnson Studio, the firm behind the rooftop lounge at The Wit Hotel in Chicago, among other projects.

"Walking down the streets is one thing, but being able to let your guard down and see the city reduced in size -- all the while still breathing the same air and still hearing the buzz of the city -- it can be intoxicating," says Chung.

So what exactly makes for a good rooftop bar? Chung says there are several key factors. "One of the most important moments ... is the first view coming off the elevator," he says. "Where else do you get to have such a theatrical reveal -- doors opening in slow motion to the top of the city?"

Of course, space planning, comfortable seating, spectacular views and a creative and varied menu are important as well, the latter in particular.

"Unique food and drink offerings are becoming a given," says Chung, "and a top-notch bartending crew can be a draw on its own. But really, as long as there's a view and fresh air, people will come."

Here are some of the best rooftop bars in Manhattan to visit this summer.

PHD Terrace at the Dream Midtown hotel is newly renovated and has doubled in size, with expansive views of Times Square and midtown Manhattan.

There's a menu of small bites, such as the BLT deviled egg and Murray's meatballs served with house-made pickles.

Bottle service is available for the high rollers in the house. Otherwise, try one of the specialty cocktails like the Hot to Trot (tequila, cucumber, jalapeno) or the Singani Sour (made with the Bolivian spirit Singani 63, lemon and grapes).

In the Lincoln Center area, the 12th floor of the Empire Hotel is home to the Empire Rooftop, a new property from the team behind the fabulous and sadly shuttered Campbell Apartment (which recently reopened under new ownership).

The lounge spans 8,000 square feet with east- and west-facing terraces, two bars and a fireplace.

The menu has a range of small plates on offer, including Koreatown fried chicken wings, fried mac and cheese and Moroccan spiced lamb sliders.

Cocktails include a barrel-aged old fashioned, the signature Empire Sunset (made with rum, vodka and citrus) and carafe cocktails, including a pineapple-jalapeno margarita and Prohibition Punch.

The Roof at Park South is located on top of the Park South Hotel, offering views around the Gramercy and Flatiron neighborhoods of Manhattan.