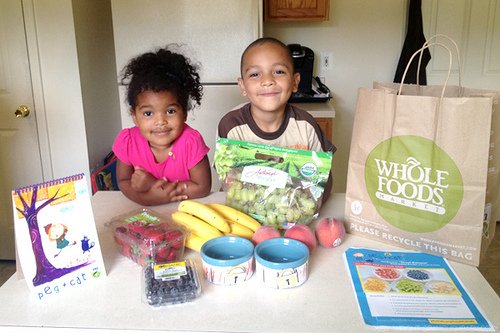 One thing that some people say others take for granted: a summer away from school in which a child doesn’t miss a meal. For many children, when school ends, their guaranteed breakfast and lunch ends as well. Food Bank For New York City, Feeding America and Morgan Stanley partnered last Thursday to make those who are fortunate aware of this problem.

In a 24-hour span, the campaign known as “Feeding children Around the Clock” launched as a one-day only Morgan Stanley project, stretching from Australia to Hawaii, attempting to feed close to 2 million children around the world. Taking four to five months to put together, the New York kickoff of the global event went off without any issues.

Organizers said they wanted to put together an event that didn’t double as just another excuse to socialize.

“Sometimes you forget and think ‘oh I’m doing something with my colleagues’ and forget the impact you’re having,” said Joan Steinberg, Global Head of Philanthropy at Morgan Stanley. “We really wanted to touch on a topic that’s really important, feeding kids, in a way that they can actually make a difference. It’s really the perfect time to talk about it because we’re two weeks away from summer. While we’re thinking about ice cream and barbecues and hanging out by the pool, there are about 18 million kids who are about to lose their school lunches and not have a replacement for them.”

Steinberg continued, “In a country like ours with such abundant wealth, we can do our part to make sure that does not happen. It’s not OK that kids miss a meal.”

Anyone walking by the event in the middle of Times Square could pledge to give back by signing up right there to volunteer at the local food bank in their neighborhood no matter what city they were from. Volunteers in attendance packaged canned food and other edible items into boxes set to help those in need. Feeding America’s Chief Development Officer Andy Wilson spoke about the partnership with Morgan Stanley that goes back almost a decade.

“We’ve had a partnership since 2009,” said Wilson. “Morgan Stanley has been one of our great partners. We’ve got 33 million kids who are on reduced and free breakfasts and lunches, and about four out of five of those kids aren’t going to have a place to eat in the summertime when school is out.”

Steinberg said she hoped to sign up as many people as possible to volunteer because she knew that the first day a person showed up to help wouldn’t be their last.

“Once you get introduced to a food pantry, it’s kind of hard to not come back,” she explained. “Once you’re interested in serving kids in your community, that’s the kind of thing you stick with.”

Food Bank for New York City’s Vice President for Fundraising Francisco Tezen said that 18,000 meals were packed at Times Square and are going to emergency feeding programs that help people across the city.