Aaron Judge dramatically becomes the new face of the Yankees 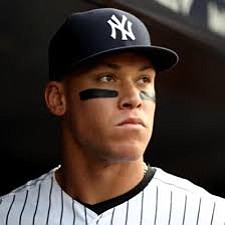 The hype surrounding the Yankees’ 25-year-old right fielder Aaron Judge is understandable. His stats and prodigious blasts are as awe-inspiring as that of any Yankees rookie in recent memory. Before facing the Boston Red Sox last night (Wednesday) in the Bronx, Judge led the Yankees with 18 home runs, 41 RBI, 129 total bases and an OPS (on-base percentage plus slugging percentage) of 1.116.

What makes Judge even more intriguing is that at 6-foot-7 and 280 pounds, he is one of the largest players in Major League Baseball history. But MLB has seen many comets flash across its skies, quickly disappearing from the game’s orbit. Judge, like so many rookies who experience exceeding success, knows how difficult it is to maintain consistency in a discipline, hitting a baseball that may be as challenging as any single act in sports.

The 25-year-old from Linden, Calif., in spite of having played only 81 games—Judge appeared in 27 games for the Yankees last season—and logging less than 300 at bats, has already been placed in star status with the insertion of “The Judge’s Chambers,” a three-row, 18-section that models courtroom pews behind right field.

“It’s pretty cool,” Judge said in late May after the unveiling of the fan attraction. “When you come to a game, it’s supposed to be fun for the players and the fans. So I feel like it might be something that’s fun for the fans out there.”

It’s been an extremely fun season thus far for Yankees fan, who were a surprising 32-23 and in first place in the American League East, one game ahead of the 32-25 Red Sox when C.C. Sabathia (6-2, 4.12 ERA) took the mound last night seeking to become the 65th pitcher in MLB history with at least 230 wins.

Judge, who attended Fresno State, has invoked thoughts and comparisons to Yankee legend Derek Jeter. Some of the associations are valid, as Judge is the AL’s leading candidate for Rookie-of-the-Year honors, which Jeter captured in 1996. Like Jeter, Judge has also displayed admirable poise in the midst of the growing adoration by fans and increased scrutiny by media. From a non-baseball lens, the two are linked because of perceived racial similarities.

Jeter is bi-racial, the son of a Black father and white mother. Some have assumed the same of Judge. He has not spoken publicly regarding his racial makeup, but what is known is Judge was adopted by teachers Wayne and Patty Judge the day after he was born.

His ethnicity and color are immaterial to his talent. And Judge hopes he can utilize his abilities to help the Yankees garner multiple World Series rings as Jeter did over a 20-year career.