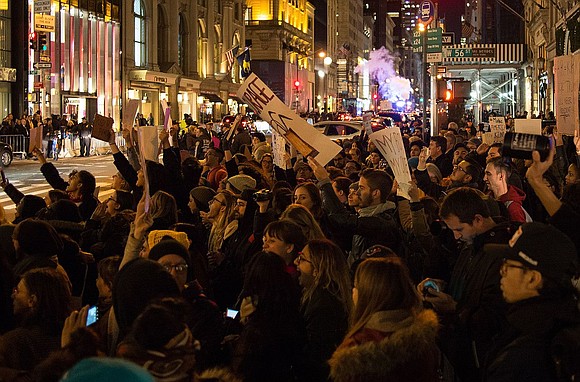 May 31, residents in a Queens’ neighborhood attempted to stop federal immigration agents from taking into custody a man charged with reentering the United States illegally from Guyana, according to the New York Daily News. The 35-year-old immigrant was finally taken to Manhattan federal court for processing.

According to observers, NYPD officers were called in for crowd control, but did not participate in the arrest. Earlier in 2017, NYC Police Commissioner James O’Neill said through a memo his officers would not assist with Washington’s directive to round up undocumented immigrants.

May 10, agents of U.S. Citizenship and Immigration Service, a part of the Department of Homeland Security that is associated with ICE, went to a Queens elementary school to investigate a fourth-grade student.

“Fortunately, school officials, following procedures of the NYC’s sanctuary cities program, refused to allow the federal immigration agents into the school,” stated a press release from the New Sanctuary Coalition-NYC.

The New York Times reported in April that the City Council would hold hearings aimed at expanding protections for the more than a half-million undocumented immigrants living in the five boroughs. Mayor Bill de Blasio also announced the designation of $16.4 million for legal services for immigrants.

Historically, New York City has been a leading voice for immigrants, beginning in 1989, when then-Mayor Edward Koch signed an executive order declaring New York a “Sanctuary City.” The City Council re-affirmed the order in a resolution in 2016, according to Al-Jazeera.com.

Some observers offer that the concept of sanctuary city began in San Francisco in 1985.

“But that’s not enough,” argued Travis Morales of @TotalRevolucion/Refuse Fascism.org during an interview with the AmNews after a recent news conference in front of 26 Federal Plaza. Activists organized for a week of actions called “Stop the Escalating War on Immigrants by Trump/Pence Regime” that began May 22.

“The thing that Trump has done is to issue an executive order that goes against the policy exercised in sanctuary cities that defies the turning over to ICE undocumented immigrants that are being held in jails,” Morales said. “People are afraid to go to the grocery store or the barber shop, because they will be stopped and deported back to the countries they came from. We have to drive out this Trump/Pence regime in the name of humanity, but it’s going to take millions of people to do it.”

“Everyone is vulnerable now,” said Juan Carlos Ruiz of the New Sanctuary Coalition. “Before Trump, we were able to go into the courts as a way to push-back against the mentality of maintaining the status quo.”

There is, however, a small public outcry to preserve “sanctuary,” Morales stated.

According to reports, Sessions said the order would be applied to federal grants administered by the DOJ and DOHS. Analysts say that more than 600 cities and counties could potentially lose $870 million in funds. The majority of undocumented immigrants live in 20 cities, according to reports.

Mazeda Uddin, founder and CEO of the South Asian Fund for Education, Scholarship and Training, told the AmNews, “We will not support NYC becoming a non-democratic city. However, the impact of things such as ICE going to the school in Queens is that people are now scared to death.”

Calls to Mayor de Blasio’s office for comment were not returned.