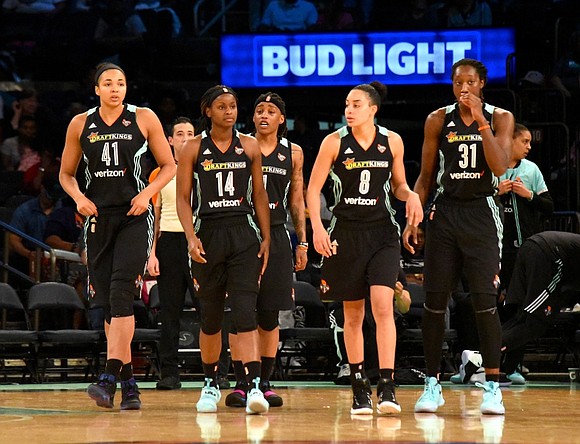 What a difference three days make. After a tight loss to the Los Angeles Sparks May 30, the New York Liberty returned to Madison Square Garden Friday, June 2, with a different vibe. The team pulled out a victory against the Dallas Wings 93-89 and then made it two home wins in a row by defeating the Phoenix Mercury 88-72 Sunday.

Center Kiah Stokes played a crucial role in both wins. Against Dallas, she scored 13 points and pulled down 15 rebounds. She made it another double-double against Phoenix, this time scoring a career-high 23 points along with 14 rebounds. Shavonte Zellous scored more than 20 points in both wins. Overall, the starters and the reserves showed energy and strong performances.

“Coach [Bill] Laimbeer talked a lot about everyone being ready and everyone providing energy no matter how many minutes you play,” said guard Lindsay Allen. Selected in the second round of this year’s WNBA draft, Allen did not make the New York Liberty roster at the end of training camp but was re-signed last week along with guard Chelsea Hopkins to make up for the temporary absence of guard Epiphanny Prince and center Kia Vaughn. “It was a really fun win.”

“With Piph and Kia away, it’s been great for all of us to step up,” said forward Rebecca Allen. “Any win that we’re getting at this point, we’re really happy and we’re going to keep rolling them over. We’re learning to play to each other’s strengths.”

Stokes said her mindset is to be a threat on offense and maintain her defensive stance, getting stops, rebounds and blocks. Tina Charles, the leader and core of the Liberty, referred to Sunday’s win as a “great collective effort.” Laimbeer has said his goal is that other Liberty players step up and take a bit of the pressure off Charles, but she said she’s there if her teammates need her.

“Everything the individuals in this locker room are able to do, they’ve been doing,” said Charles. “It’s great to see, especially from Zellous and Stokes. … [Kiah] has been putting in the work in the gym. I’ve been trying to work on her and giving her confidence. I’m happy to see it turn over into the game. I hope she takes this and rides it.”