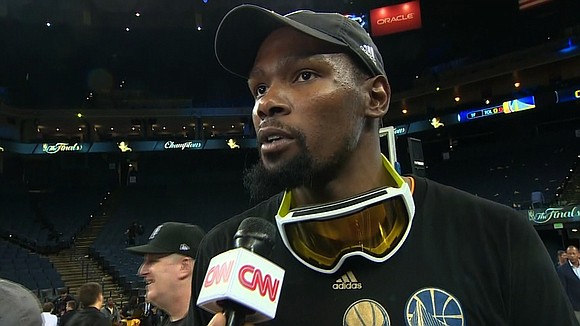 The Warriors have defeated the Cleveland Cavaliers 129-120 in Game 5 of the NBA Finals, clinching their second title in three years and their fifth in team history, avenging the loss to Cleveland after blowing a 3-1 lead a year ago.

Durant led Golden State with 39 points, seven rebounds and five assists and was named NBA Finals MVP in a unanimous vote. He scored 30 or more points in six of the last seven games, including the last five. Following Monday's win, he embraced his mother, Wanda Durant, on the court.

This was the first time in NBA history the same two teams met in the NBA Finals for a third straight time. The Warriors won the title in 2015 in six games, while the Cavaliers dramatically won in 2016 in seven, becoming the first team in NBA history to win a series trailing 3-1.

Durant, who famously called his mom the "real MVP" when he won the NBA MVP Award in 2014, knew what it felt like to lose a 3-1 lead -- and losing to LeBron James. In 2012, when he was playing for the Oklahoma City Thunder lost to James -- who was then with the Miami Heat -- in five games.

After the Cavaliers won the title in 2016, Golden State's focus turned to a player who wasn't in the NBA Finals: Durant. He was entering free agency after the Thunder gave away a 3-1 lead against the Warriors in the Western Conference finals. It spurred the most frenzy surrounding an NBA free agent decision since James announced in 2014 that he would return to the Cavaliers after spending four seasons with the Heat.

With a superstar in Durant teaming another in Stephen Curry -- as well as Draymond Green and Klay Thompson -- it made Golden State a super team, and the group was close to unstoppable in the regular season and postseason.

While the Warriors didn't surpass their NBA record of 73 regular-season from 2016 (they settled for 67 this year), they still had the NBA's best regular-season record. Golden State went 16-1 in this year's playoffs, good for the highest winning percentage (.941) in a single postseason, surpassing the Los Angeles Lakers from 2001 (15-1, .938). Twelve of the Warriors' 16 playoff wins this postseason were by double digits.

The Warriors also did much of this without their head coach, Steve Kerr, on the sideline for an extended period of this postseason. Kerr coached the first two games of Golden State's first-round playoff series against the Portland Trail Blazers in April but stepped away because he was experiencing complications from back surgery from two years ago.

During his absence, Kerr was still involved at practice, but he handed the game day responsibilities to assistant coach Mike Brown. Golden State went 11-0 during that stretch before Kerr returned for Game 2 of the NBA Finals. This is Kerr's seventh championship, five of those as a player and two as a head coach.

Monday's loss denied the Cavaliers a chance to repeat as champions and for James to get his fourth championship ring. It was his seventh consecutive trip to the NBA Finals, the only non-Boston Celtic to do so. It also kept the Cavaliers from becoming the first team in NBA history to come back from trailing 3-0 to win a best-of-seven series.