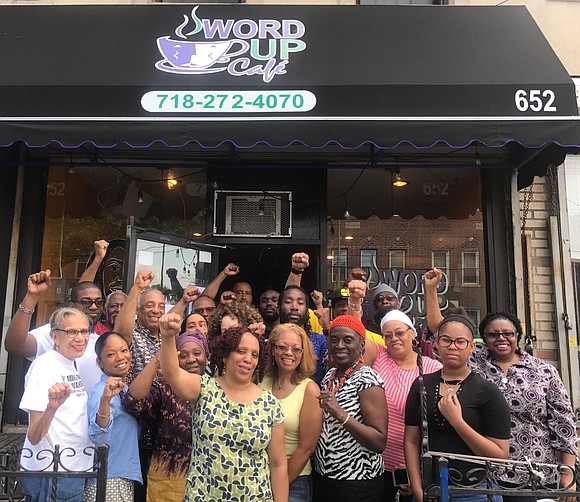 Buy Black! This phrase can either enlighten or tighten the attention of the listener. Historically buying Black has always been a choice either forced upon the consumer or a choice made by the consumer. In our current climate, people we must be inspired by the dismal conditions that we face and do as our ancestors did and create a way out of no way. This challenge is just what has inspired Operation P.O.W.E.R. to make the phrase Buy Black and their community, East New York, synonymous.

The Buy Black East New York campaign is a push to awaken and organize their community around the cooperative economics one should practice daily. Assemblymember Charles Barron said, “How many times have you heard that Black folk have more than a trillion dollars of buying power as a collective? How many times have you heard that the Black dollar only circulates in the Black community for a mere six hours in comparison to 17 days for the Jewish community and 28 days for the Chinese community? I’ve heard them quite enough and so have others. The economic conditions of Black communities in the five boroughs deserve a pointed response at changing the narrative from the ground up. This why Operation P.O.W.E.R. kicked off this campaign in resounding fashion joined by community members and elected officials at a local cafe.”

Word Up Café is a community café that was chosen to kick off this initiative for a host of reasons. The café, since opening in the fall of 2016, has provided community events that serve every demographic of the neighborhood. From Gospel brunches to weekly open mics, Word Up Café respects the culture of the neighborhood and recognizes that it must be a part of the community and it will be rewarded. More than $400 was raised to go toward the rent burden and economic strain of being in business. Owner Sharon Kennedy-Frost stated “that the business was started to help our people” and was humbled by the surprise support she received. A surprise it was with the presence of Barron and Councilmember Inez Barron, who loaned their support and voice to a cause that speaks to their Black radical principals.

This campaign was put together by Keron Alleyne, an Operation P.O.W.E.R member and 60th Assembly District Leader, to serve the community in a way in which we all can participate. The campaign will be extended not only to businesses but also to social organizations and community-based groups doing awesome work in the district. We all can extend some support to our unsung heroes and sheroes who make the so-called hood look good. This campaign is an opportunity to put our money where our collective mouth is. With our communities under siege, our youth must know that we too have fought back! This statenment is our call to action Buy Black! East New York!

If you want to participate in the Buy Black East New York campaign, we’re making a return to Word Up Café Saturday, June 24, at 2 p.m. to keep our commitment to them because they’ve been so committed to us!