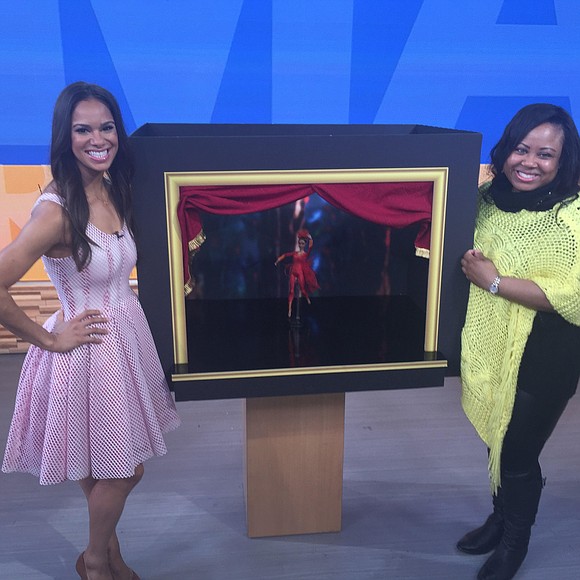 When Misty Copeland steps onstage in this, her second, year as the first African-American principal in the 75-year history of American Ballet Theatre, she will make history once again with debuts as the first Black ballerina to dance the lead in several iconic classical ballets on the stage of the Metropolitan Opera House.

During ABT’s eight-week spring season, Copeland makes her debut, first, as Kitri, the spirited heroine of “Don Quixote,” exploding onstage in a ballet described as “fireworks set to music.” Then, a week later, she appears as the delicate, fragile lead in “Giselle,” the quintessential romantic ballet about the transcendent power of love and forgiveness. Dancers who’ve performed this role include some of the greatest ballerinas of all time, from the legendary Anna Pavlova, to Cuba’s Alicia Alonso, Russian-born Natalia Makarova, Native-American Rosella Hightower, Chilean-born Lupe Serrano, Gelsey Kirkland and more. Now the young African-American ballerina’s name will be added to this list.

For Copeland fans, the ABT 2017 spring season is a moveable feast. She performs in practically every major ballet from “Swan Lake” to the hotly anticipated premiere of Alexei Ratmansky’s “dollop of delightful whimsy,” “Whipped Cream.” Each is a testament to her technical facility and dramatic ability to merge meaning, mood and movement. This historic moment is the result of Copeland’s talent, discipline and determination and the network of support that envelops her. It is a network that includes fans who flock to her performances and follow her on social media, teachers from her days at the Boys & Girls Club to colleagues with the company she “always dreamed of dancing with,” American Ballet Theatre—from Artistic Director Kevin McKenzie and Artist-in-Residence Alexei Ratmansky and fellow dancers—and supporters such as TV producer Susan Fales-Hill and Goldman Sachs’ Valentino Carlotti. It also includes people in the arts and finance who she has thanked in her biography, documentaries, articles and more. One of those is the young African-American woman who is Copeland’s manager and publicist—Gilda Squire.

Observing the mutual respect and admiration between Copeland and Squire might cause one to conclude that they are just BFFs. Although friendship is a key factor, so is the fact that these two Black women, at the top of their game and sharing a common goal, have joined forces. As a result, Squire, a woman with her own company and solid strategic communications skills, is undeniably a key figures behind ABT’s first Black principal ballerina.

“Misty was my introduction to classical ballet,” Squire said in typically unpretentious fashion. She first became aware of Copeland while attending a New Year’s Eve party at the home of Vernon Ross, manager of ABT’s Men’s Costume Department. People couldn’t stop talking about the Black ballerina dancing en pointe on top of Prince’s piano during his North America Tour.

“It got my attention,” Squire said. “So I asked, ‘Who’s she with?’ When someone said ABT, a surprised Squire asked, “The white company? They have Black dancers?”

Squire continued, “After all, when you think of ballet, you think of privileged white folks. It’s expensive. I knew that much.”

Later, Squire Googled Copeland. What little she found made her ask, “How is it possible we have not rallied behind her and supported her in her quest? How have we not gone to her performances?”

Armed with a background in PR and brand-building skills honed while working for a government agency, and then Goldman Sachs, and later major book publishers before launching her own business, Squire sensed that after years of disappointing portrayals of African-American women in pop culture, Copeland could make a difference.

“Let me be clear,” she said. “When I started working with Misty, I was so excited about her. Her story is what got me.”

At the time, the movie “Black Swan” was getting a lot of attention. The irony that ballet had no Black black swans was not lost on Squire. The day after the New Year’s Eve party, she asked Ross to put her in touch with the ballerina, thinking, “If she’s interested, I will work for her for free for the next three months of award season.”

Soon, she got a call: “Hi, it’s Misty Copeland. I understand you want to meet with me.” Squire offered to do publicity pro bono telling Copeland, “Little girls and young women should know about you. You’re an inspiration.”

Getting Copelands’ story out would, she said, be her good deed of 2011. “In my mind it was temporary,” Squire said.

Setting out to get the job done, surprisingly, she ran up against a brick wall. “No one cared,” she said. “People in the dance world knew who Misty was, but the general media didn’t. I’m like, ‘Are you kidding me? This is the real Black Swan!’”

Squire switched into overdrive. She called in favors. Soon Copeland was on Tavis Smiley’s show, “Positively Black,” and in New York magazine. Things began to pick up. When, in an interview, Copeland mentioned Raven Wilkinson, a Black ballerina who defied racial barriers in the 1950s by joining the Ballet Russe de Monte Carlo, Squire tracked Raven down. Turns out both pioneering ballerinas had been “admiring one another from afar.” They even lived around the corner from one another.

“I’d done what I set out to do—getting Copeland some good media hits outside of the dance world,” Squire said.

Copeland wanted her to stay on, as her manager.

“Although I was terrified,” Squire admitted, “I took a huge leap of faith and said ‘Yes.’”

Sine 2011 Squire has come up with remarkable ways to tell and advance Copeland’s story and, by default, the hopes and dreams of countless young Black would-be ballerinas. When Copeland confided her dream of dancing the lead in “Swan Lake,” “Giselle,” and other iconic classical ballets, Squire made a decision. “I decided that I have to learn what’s going on in ballet and what it takes to break through the glass ceiling,” she explained.

Copeland is the first to acknowledge that other talented African-American ballerinas have preceded her. In fact, two once danced with American Ballet Theatre—Nora Kimball and Anna Benna Sims. Clearly, in addition to a welcoming institution and an open-minded artistic director, more was needed to shatter the glass ceiling, such as a critical mass of internal and external forces. Squire’s helped orchestrate that paradigm shift.

People who didn’t know Copeland before, know her now. What unites Copeland and Squire is a common goal and a special mission—the desire to raise the floor of what’s acceptable and push the ceiling of what’s possible to open the flood gates that have denied Black ballerinas access to the restricted and predominantly lily white world of classical ballet. That goal is reflected in the books Copeland has produced, including a biography Squire arranged for her to work on while recovering from an injury and a children’s book, and also in an UnderArmor commercial. It’s reflected in the documentary “A Ballerina’s Tale,” the Mattel Misty Copeland Barbie doll, the recently published book “Ballerina Body,” the ABT outreach program, Project Plié, and appearances that inspire youngsters who, as Copeland once did, just need someone to affirm that their dreams can come true.

For Squire, Copeland’s dreams and triumphs are her own. Recalling the night Copeland performed the lead in ABT’s production of Ratmansky’s “Firebird,” Squire said, “I’m walking through the Metropolitan Opera House lobby and I’m like, ‘Holy Cow, there’s Mr. Mitchell, there’s Gayle King, there’s Judith Jamison, and on and on. It was the most fulfilling moment. I got chills. It was like, we did it! There are Black people here. There are Brown people here. There are Latinos here. It was like a wild explosion of diversity. I texted Misty, ‘I know I shouldn’t be texting you ‘cause you’ve got to focus but oh my God there are so many Black people here, Misty. In the orchestra!’ And, she was like, ‘Really?’”

Squire continued, “Misty is like family to me. I absolutely adore her. I respect her so much. I’m used to working with people who are like, ‘This is too much. You need to dial it back.’ Misty has never said that. She has trusted me to help guide her career off the stage and if I go to her and say, ‘Misty, we have to do this,’ she’ll say ‘OK.’ I remember someone once asked her ‘What do you think is the best business decision you’ve ever made?’ And, she said, ‘Hiring my manager because what got me about her was she asked me, ‘What is it you want to say? What is it you want to accomplish?’ That meant so much to me because nobody has ever asked me that before. The thing I respect about Gilda is that she’s as committed to me and ballet as I am.”

Squire smiled and shook her head. “It’s true,” she said.