Maxwell burns up the stage with his BlackSUMMERS’night show 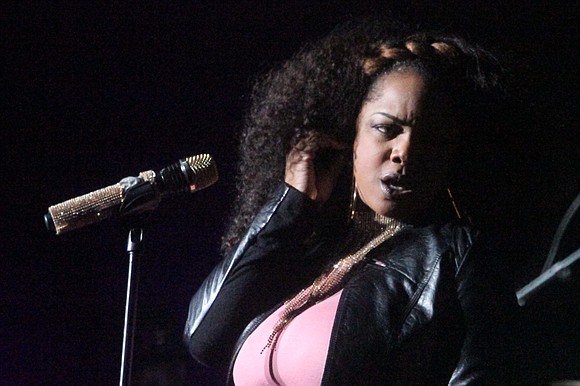 Two stepping with a falsetto lean. Maxwell heated up Long Island’s BlackSUMMERS’night last Saturday, when he virtually brought the newly renovated house down at Nassau Coliseum at NYCB Live, with special guests Ledisi and Leela James. A multiple Grammy Award-winning singer and songwriter, Maxwell brought his 20-years-in-the-game, five-album-having, internationally acclaimed, Brooklyn-born talents to perform at the new NYCB Live, Home of the Nassau Veterans Coliseum in Uniondale, last Saturday, June 10, with a crowd that has always built preference by recognizing good old pure soul and R&B as opposed to mounting “likes” or downloads. They knew that they were in for some Saturday night goodness.

In an all too short set, Leela James, with her perfect untampered-with soulful voice, moved the crowd from the stage, and the ones who thought they were too stush to get up and dance, she certainly made them do so when she walked through the audience and sang her lungs out! She “Did It for Love,” bolstered by her hits such as “Set Me Free,” “It’s Alright,” “Man’s World” and “Don’t Want You Back.”

High heels clicking, Ledisi brought her jazzy soulful self and got the crowd amped with her hits such as “Alright” and especially “I Blame You.” She made the audience respond and groove with her, although a little tentative at first. They became Ledisi converts for sure!

Oh y’all came to see that Maxwell dude, who went from afro’d to short-back-and-sides? Well, pick a hit, choose a favorite album from Urban Hang Suite to the latest BlackSUMMERS’night, the much anticipated second installment of his trilogy. I first saw this guy approximately 20 years ago in a small performance space in London. It was a somewhat exclusive to-do, with a relatively small audience to introduce this new artist with a smooth banger called “Ascension.”

I made sure that I hung around to see the second late night set. He was that good. Now 20 years later, he has not lost his sultry charisma and definitive Rico Suave-ness. Maxwell is a performer’s performer.

“Woman’s Work,” “Till the Cops Come Knocking,” “Fortunate,” “Whenever, Wherever, Whatever,” “Fistful of Tears,” “Pretty Wings,” to “Lake by the Ocean,” and “Gods,”—he could sing for days and not run out of material. And his rendition of Prince’s “Do Me Baby,” as a tribute to the icon went down well.

The man on his nationwide tour had Long Island attendees, with a large Brooklyn contingent by the way, rocking til they almost got thrown out.