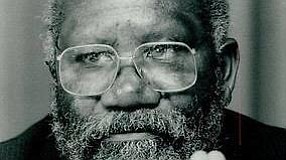 Herman A. Toivo ya Toivo

He was a man of strong beliefs and convictions, the African National Congress said.

“Comrade Toivo dedicated his life to the fight against oppression by the then South Africa authorities, rejecting apartheid South Africa’s reduction of sovereign Namibia into its colony,” the ANC said in a statement. “He was Namibia’s longest serving Robben Islander, having served 16 years on the Island with Nelson Mandela and other luminaries of the African peoples’ struggles following conviction for contravening South Africa’s Terrorism Act. His life was the personification of solidarity, the quest for self-determination and unyielding commitment to the liberation of his people.”

Ya Toivo was a founding member of the South Western African People’s Organization and its predecessor, the Ovamboland People’s Organization. He also advocated for the rights of African and Black mineworkers in South Africa and Namibia and was banished from South Africa for smuggling taped testimonies to the United Nations about the harsh experiences of Black mineworkers.

Speaking at his trial in Pretoria, he denounced South Africa’s annexation of Namibia.

“We find ourselves here in a foreign country, convicted under laws made by people whom we have always considered as foreigners,” he said. “We are Namibians, and not South Africans. We do not now, and will not in the future, recognize your right to govern us, to make laws for us in which we have no say, to treat our country as if it were your property and us as if you were our masters.”

When he returned to Namibia, thousands of jubilant supporters were there to greet him, pouring into the streets of Katutura, a segregated Black township near Windhoek.

He leaves behind his wife of 27 years, Vicki Erenstein-Ya Toivo, his twin daughters Mutaleni and Nashikoto, and two adopted sons, Philemon and Isaack.

“South Africa has lost a true friend in Comrade Toivo ya Toivo and we send our deepest condolences to our fraternal organization, SWAPO, the people of Namibia and Comrade ya Toivo’s family on his passing,” the ANC said.