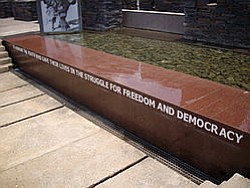 The fountain at the Hector Pieterson Museum Wikimedia Commons

On June 16, the December 12th Movement is inviting folks to join them in celebrating the 41st anniversary of the historic youth uprising in Soweto, South Africa. The program begins at 7 p.m. at Sistas’ Place, 456 Nostrand Ave., Brooklyn.

The 1976 Soweto Uprising began as a peaceful student protest against the mandatory use of the Afrikaaner language in the schools. Government troops opened fire on the unarmed students, killing several hundred. Protests spread rapidly across the country. The Apartheid government imposed a media blackout as the images of Black children defending themselves with rocks against government tanks led to international condemnation.

Acclaimed spoken word artists Rashad Wright and Mandela “Black Zeus” Brathwaite and the internationally renowned Impact Repertory Theater will perform. A presentation and group discussion on the lessons of the Soweto Uprising to the 2017 attack on the education of Black children in the era of Trump will follow. The event is free.