Warriors win chip amid hypocrisy, rhetoric and absurdity of fans and media 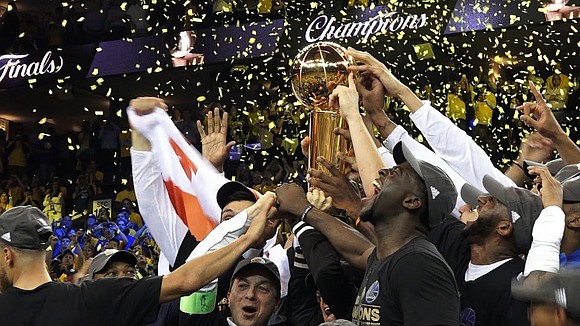 The Golden State Warriors had only lost two games since March 11. They won 15 out of 16 to close out the regular season, and 15 out 16 to close out the postseason Monday night in front of their Northern California fans, winning their second NBA Championship in three years.

Golden State swept through the playoffs, defeating the Portland Trailblazers, the Utah Jazz and the San Antonio Spurs in four games each, and the Cleveland Cavaliers, the defending NBA champions, in five.

Their ability to defeat the Cavs was credited not only to their superiority but also to the subpar talent that surrounds LeBron James on this Cleveland team. “He needs help,” is said, except when they win. Twelve postseason games in a row, and then you’re reminded that “he’s the greatest player on this planet.” And when he’s scrutinized, it’s far harsher than, say, Golden State’s star guard Stephen Curry, who some African-Americans claim (and include several African-American media members in that) gets by harsh scrutiny because of his light-complexioned skin, and the perception that he’s been a silver-spoon child of privilege, which in some minds, is the reason that he’s a lovable favorite of the NBA and its fans.

The poor play of Tristan Thompson, the Cavs’ forward, in the first three games was blamed on the Kardashian curse, their so-called jinx on the men that those woman date. Thompson dates Khloe, who attended Friday’s game in Cleveland along with her mom, a win for the Cavaliers that night, but one that only delayed the inevitable.

Media, knowingly or not, caused dissension by asking, “How long is Kyrie Irving going to be satisfied playing behind James?”

A crazy theory that once again circulated is that the Cavaliers were allowed to win Game 4 in Cleveland of this championship series, sending it back to Oakland because the NBA and television network ABC/ESPN would lose too much money if either team, in this case Golden State, won four games in a row, sweeping the series, leaving millions of dollars of revenue on the table from Games 5-7.

Tyronn Lue, the Cleveland Cavaliers’ head coach, who was only able to lead this team to one win in this series after defeating Golden State last year, the team’s first ever NBA championship, is without a doubt critiqued harsher than Golden State’s head coach Steve Kerr.

After a major loss, his experience and ability to coach a team is questioned. You’re reminded that he got the job because of the insistence of James, who’s recognized as the unofficial, off the record, de facto head coach and general manager of this team, because of his status as “The Greatest Player.” When Kerr loses a game, his ability to coach is never questioned. It’s blamed on his players having a bad game.

In actuality, Lue has much more experience on the sidelines than Kerr. A former player, as was Kerr, Lue started coaching as an assistant with the Boston Celtics in 2009, and then with the L.A. Clippers in the 2013-14 season. He joined the Cavaliers to start the 2014-15 season as the highest paid assistant coach in the NBA.

Kerr’s experience since his playing days has been as a television analyst and in the front office. No X and O experience until he took over an intact team that was coached by Mark Jackson, who to his credit, he graciously acknowledges. Jackson’s contract wasn’t renewed because of differences in philosophies between him and the Warriors’ upper management.

Although Golden State lost Game 4, making the series 3-1, winning Game 5 was a must for them. Cleveland would have had the momentum going into Game 6 back in Cleveland, putting the Warriors in a dangerous position.

“We haven’t played great thus far, but there’s no pressure on us,” said Cleveland’s reserve forward Richard Jefferson before the fifth game. “It’s been about them proving that last year was a fluke, and K.D. [Kevin Durant] validating the move here.”

For Durant, 28, the playoff MVP, yes, it’s about validation of his decision to leave a promising team, the Oklahoma Thunder, after nine seasons last year to join an already great, intact team, the Golden State Warriors, who set a record last season by winning 73 regular season games, appearing in three consecutive NBA championships. But the absurdity of Jefferson’s statement is that a Cleveland loss gives Golden State their 16th postseason win Monday night, 129-120, the 2016-17 NBA Championship in front of their fans, friends and family, while Kool and the Gang’s song “Celebration” played, followed by Queen’s “We Are the Champions” as confetti flowed and magnums of chilled Champagne waited in the locker room, and then the parties, another parade and one more tricked out diamond ring.