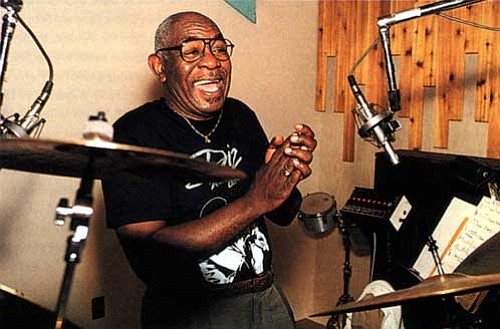 The drummer Mickey Roker, whose distinctive groove placed him on the first-call list for such musicians as Sonny Rollins, Horace Silver, Tommy Flanagan, Herbie Hancock and Ella Fitzgerald, died May 22 in Philadelphia, where he had resided for many years. He was 84.

For the last few decades of his life, Roker lived in Philadelphia, where he performed regularly with the city’s jazz notables, including Shirley Scott, with whom he recorded five albums between 1966 and 1991, including their debut recording together, “Soul Duo,” with Clark Terry (Impulse! 1966).

“Mickey was very magical when it came to putting things together,” said the saxophonist and composer, Sonny Fortune. “He could swing his behind off.”

Granville William “Mickey” Roker was considered a native Philadelphian, although he was born in Miami (Sept. 3, 1932). At the age of 10, after his mother died, he was moved to Philadelphia by his grandmother. In his new surroundings, young Roker was introduced to jazz by his uncle Walter, who offered him jazz records to consume and brought him his first drum kit.

His jazz tutorials with his uncle later extended to the pulsating jazz scene, where New Yorkers also traveled to Philly to check out the jazz clubs. Here, Roker was transformed from an idle listener to an active participant.

On these sacred jazz grounds, he met the drum master Philly Joe Jones, who became his most significant influence. He studied all of Jones’ moves while developing his own style, including his noted soft touch.

“Mickey was very helpful and encouraging to young musicians to do their best,” said the drummer David F. Gibson. “He was my mentor, always positive and kind. He never had an ego for what he had accomplished in life as a great musician.”

After high school, Roker served in the U.S. Army and was discharged in 1955. He immediately returned to Philly. With his reputation on the rise, he began working regularly with local up and coming jazzmen such as Lee Morgan, Kenny Barron and McCoy Tyner.

In 1957, he played a six-night engagement with the vocalist Gloria Lynne, in which he joined Jimmy Heath. During this time he became friends with the bassist Bob Cranshaw. The two eventually became a dynamic duo who played with Milt Jackson, Junior Mance, and Joe Williams. During the 1960s and 70s, Roker was a fixture on recording dates for Blue Note Records. He is the eminent drummer on Herbie Hancock’s standard album “Speak Like a Child” (Blue Note 1968). He also appears on three of Lee Morgan’s Blue Note ventures, including his classic “Live at the Lighthouse” (1970).

When he moved to New York in 1959, he joined forces with Gigi Gryce for a series of quintet recordings. Not only fans but also musicians remember his stint with the Duke Pearson big band in the mid ’60s and with Nancy Wilson.

That stretch led to his working with such big band leaders as Duke Ellington, Count Basie and Woody Herman. Aside from his amazing musicianship, it was his six sense with vocalists that held him in such high esteem in the big-band arena.

During the 1970s, Roker became the drummer of choice for Dizzy Gillespie, recording six albums with his band on the Pablo label, which included the well-known “Afro-Cuban Jazz Moods” featuring Machito (1975) and “Carter, Gillespie Inc.,” with Benny Carter (1976).

His prior work with Milt Jackson offered him the opportunity in the early 1990s to occasionally play with the re-formed Modern Jazz Quartet. He later replaced Connie Kay, the original MJQ drummer after his retirement in 1992. The following year, MJQ ended its long celebrated jazz reign, and Roker performed on its final album, “MJQ & Friends: A 40th Anniversary Celebration.”

“Mickey Roker was a true musical legend, having participated in some of the most iconic recordings in jazz,” stated vibraphonist/composer Joe Locke. “He was also one of the kindest, funniest and most genuine human beings I’ve ever known.”