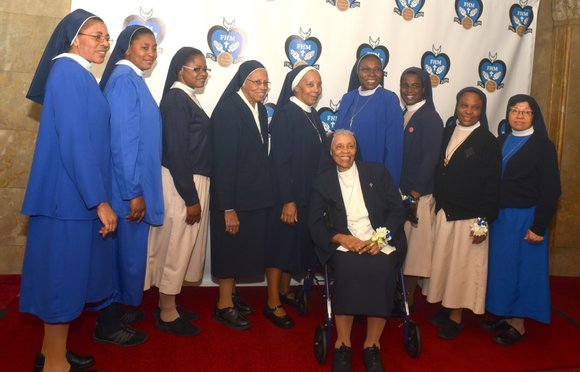 The Franciscan Handmaids of the Most Pure Heart of Mary, Inc. (FHM), one of three orders of mostly Black nuns in the United States, has put its Harlem location on the market as they restructure. The order, which celebrated its centennial last year, came to national prominence in 2016 on ABC’s “The View” with Whoopi Goldberg.

The Motherhouse, located at 15 W. 124th St., was built in 1909 as a high school and business college. In 1931, the property was sold to the Christian Brothers’ Institute and, in June 1944, it was transferred to the FHM. The building is a base for the congregation’s operations, and it houses some of the order’s members and the St. Benedict’s Day Nursery.

The order, which also houses sisters in the Bronx, Staten Island and Yonkers in its own and other Catholic Church properties, is planning to stay in Harlem and is looking to identify or build a facility for its congregational offices, living space and growing nursery, in the hopes of servicing 100 children. The move from the current location, which contains a nursery that now services 61 children ages three to five, is not expected to take place for a year or more.

“The sale of the Motherhouse will allow us to relocate to a smaller facility that is more suited to our current congregation size and planned expansion initiatives,” said Sister Gertrude Lilly Ihenacho, who as congregation minister heads up the order. “As we look forward to our second 100 years, it is with enthusiasm that we gear up to expand our ministry in Harlem and our other ministries across the nation and around the world.”

In 2010, the order considered shuttering but eventually decided to embark on a course of revitalization. In recent years, the group has doubled its numbers to 24 sisters. Most of its growth has been in Africa, with sisters joining from Kenya, Ghana, Cameroon and Nigeria, where the order has recently completed construction on a new convent in Owerri, Nigeria. The sisters, who teach Catholic catechism and farming skills and also run periodic medical missions in Owerri, are also planning to build a satellite to St. Benedict’s Day Nursery there.

Along with its work in Harlem, which includes operating the day nursery, teaching catechism in Harlem, Yonkers and Staten Island and providing altar bread to parishes across the city, the sisters continue to operate the St. Edward Food Pantry in Staten Island and feeds more than 22,000 families annually. To support its work in ministering to marginalized communities, the order is gearing up for a recruitment tour in predominantly Black parishes across the United States and in the U.S. Virgin Islands.