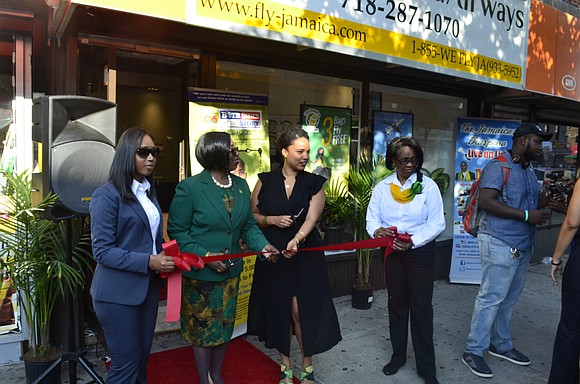 While all of the major airlines in the Caribbean are losing money and carrying debts totaling more than $50 million annually, a small upstart airline, now in its fourth year of operation, is moving to expand and open new routes.

Fly Jamaica Airways, owned mainly by Captain Ronald Reece and his wife Roxanne, announced plans in the past week to acquire a third aircraft to add to its Boeing 767 and 757 aircraft now operating between the Caribbean, Canada and the U.S., as well as running special charters for governments and other clients.

The Reeces, along with their daughter, Kayla, are an Afro family from Guyana but were forced to register and base operations in fellow Caribbean Community nation, Jamaica, because the previous Indo-dominated government in their native Guyana never lifted a finger to help them get off the ground, while granting operating permits to friends and family.

It has not, like rival Caribbean carriers, complained about losing money on routes between Guyana, Jamaica, Toronto, Canada and New York as yet and thinks that a fleet of eight Boeing 767s, 757s and 737 would not only be ideal for its fleet but also be the perfect and optimal operating size.

Late last week, the company commissioned a new office on Nostrand Avenue in Brooklyn to serve mainly Afro-Caribbean nationals living in Brooklyn and nearby districts. The carrier already has offices in Queens, where thousands of Indo-Caribbean immigrants reside. “Personal contact is very important in doing business, and we want people to feel comfortable that they have people to interact with and to make inquiries, compared to them going on a computer and booking a ticket,” Roxanne Reece explained. “We want that personal touch.”

She told AmNews that a second 757 aircraft will shortly be added to the fleet, even as its Guyana subsidiary is getting ready to launch a second brand through Air Guyana and target additional Caribbean routes, including Cuba.

Thousands of Cuban suitcase traders fly all the way south to Guyana to buy cheap Chinese products and air ship them back to Cuba for big profits.

Air Guyana, when it starts to fly, thinks it can cash in on the large but untapped market for cargo to Cuba, as well as heavy passenger loads given the fact that Cubans do not need visas to come to Guyana.

“We are just awaiting word from the cabinet in Guyana,” said Reece. “We are ready to go to Cuba anytime we get the permit.”

Diplomats from the Guyana and Jamaica consulates attended the ceremony to commission the office.

The airline is daring to expand even as all the other major carriers in the region, including Caribbean Airlines of Trinidad, Bahamas Air, Suriname Airways and Antigua-based commuter airline LIAT, are all recording huge annual losses.

Curacao-based Insel Air filed for bankruptcy recently, blaming millions of dollars of American currency being locked away in finance-starved Venezuela. Management has said that the economic crisis in Venezuela has helped to cripple a once-promising carrier.