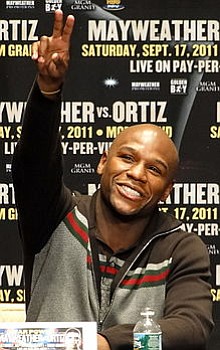 The Golden State Warriors and the New England Patriots unhesitatingly rolled off your tongue. However, most of you are still thinking or just stumped by the final challenge. It is somewhat misleading and skewed as there are four heavyweight champions representing five different entities.

The heavyweight division, which historically has been the bellwether of boxing, is a muddled mess, which is a predominant reason why the sweet science has arguably become a niche sport. Perhaps the only boxer with whom casual fans are broadly familiar is Floyd Mayweather Jr. Ironically, the 49-0 Mayweather, one of the most prodigious talents to ever lace up gloves, and perhaps still the best pound-for-pound boxer on the planet, doesn’t hold an official title.

Yet at 40 years old, the already fabulously rich Mayweather will likely make upward of $150 million to battle mixed martial arts icon Connor McGregor in a boxing match scheduled for Aug. 26 in Las Vegas. Distressingly for faithful boxing aficionados, it is more spectacle than serious competition. But it is an undistorted reflection of the state of the game as legitimate fights such as featherweight super champion—yes that is a designation—Leo Santa Cruz’s two magnificent fights against former champ Carl Frampton last July at the Barclays Center in Brooklyn and in Las Vegas this past January went relatively unnoticed.

“It’s essentially a joke,” Rudy Robinson said of the upcoming Mayweather-McGregor fight. “If McGregor was that good of a boxer, he’d be a boxer and not an MMA star.” Robinson, a producer and host of the television show “Sports New York Style,” has sat ringside for numerous title fights and last weekend was in Las Vegas covering the light heavyweight rematch that paired champion Andre Ward and erstwhile titleholder Sergey Kovalev, an event that was considered one of the best boxing had to offer but drew tepid interest from non-boxing diehards. Ward emerged victorious with an eighth round TKO.

Furthermore, the first fight, which received massive hype and was won by Ward in a controversial decision, barely moved the pay-for-view needle with roughly 160,000 buys. “I think the gap between quality fights being staged is the key,” said Robinson. “Basketball, baseball and football have year-round activity. Boxing is sporadic.”

Robinson’s theory is plausible. There are other factors at play, including internal politics that often preclude fighters from meeting each other in their prime, such as the woefully delayed Mayweather-Manny Pacquiao fiasco. After years of haggling, they at last hooked up in May 2015, at least four years too late.

Unfortunately, it may be too late for boxing to regain its luster.