Does Phil Jackson see Porzingis as the future of the Knicks? 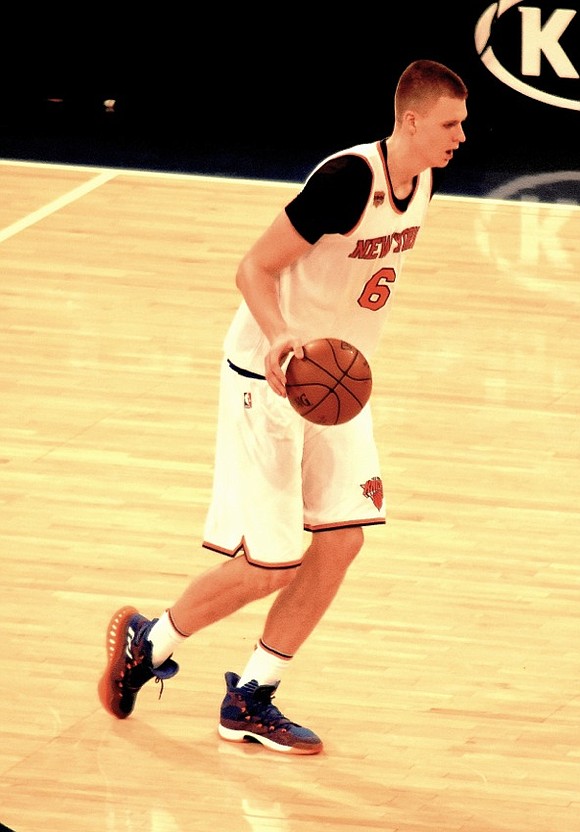 Phil Jackson has proved to be an extraordinary agitator in his three-plus years as the Knicks’ president. His primary target has been Carmelo Anthony. Now, he has fomented another adversary in Kristaps Porzingis. As tonight’s NBA Draft rapidly approaches, it is traditionally a period of lies, rumors and conjecture put forth by team executives, agents and the media.

One narrative that falls outside of those categories is Jackson pondering Porzingis’ value to the franchise as either a cornerstone piece or valuable trade asset. Given Porzingis’ disenchantment with how Jackson has comported himself, who created disarray by publicly marginalizing Anthony and insisting on the team running the triangle offense, his future with the Knicks has become dubious.

Although the Knicks have Porzingis under contract through the 2018-2019 season and hold a qualifying offer for the 2019-20 season, when he’ll only be 24, there are indications the 7-foot-3 Latvian may consider moving on when he becomes an unrestricted free-agent, just at the beginning stages of his prime.

For now, Porzingis is seemingly prepared to endure Jackson’s psychological gamesmanship. “Despite how the Knicks are treating their players, Kris wants to stay in New York,” said his brother Janis Porzingis, to ESPN reporter Ian Begley. “He loves the city and he loves the fans and he wants to win with this team. If he’s going to be traded, he’s going to play out his contract and decide his future on his own.”

Jackson is wise to explore trade options for Porzingis. There is no debating he has shown great potential in his two years in the NBA. Although there are no certainties of stardom, as too many variables can alter a player’s career, as evidenced by the Philadelphia 76ers’ wonderfully skilled center Joel Embiid playing only 31 games since being drafted in 2014 because of injuries, Porzingis should logically develop into a top 20 performer in the league.

But that may not be enough to elevate the Knicks into a playoff contender over the next three years unless the team’s shot callers can dramatically upgrade their talent. Anthony Davis, widely considered one of the five best players in the world, could only carry the New Orleans Pelicans to a 34-48 record and 10th place in the Western Conference this past season.

Most importantly, Jackson has yet to demonstrate that he can lure basketball’s best free agents to New York, so until he can, the Knicks are going to have to be built through the draft and player development, a process that is often long and laborious.

A much better option than losing Porzingis for nothing.