The Knicks head into the NBA Draft with many needs 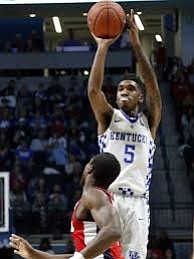 Perhaps the prevailing question entering tonight’s NBA Draft at the Barclays Center in Brooklyn for those who closely follow the Knicks is will Phil Jackson, the Knicks’ team president and the man who will have the final say on who they draft in the first round, base his decision on whether one of these gifted teenagers is a seemingly ideal fit for his triangle offense or is purely the most talented player available?

It is stating the obvious that the Knicks have substantial needs at multiple positions. They are a combined 80-166 over the past three seasons, including a record of 31-51 last season. The Knicks have finished 15th, 13th and 12th respectively in the Eastern Conference over that period.

They have the eighth overall selection in the first round, as well as the 44th and 58th picks in the second round. In a draft that has several potential All-Star and borderline All-Star point guards, the Knicks should be able to secure one of them at No. 8. It should be their utmost priority considering they haven’t had a healthy, upper-class lead guard since Stephon Marbury a decade ago.

In today’s NBA, it is nearly impossible for a team to effectively compete on a nightly basis without a proficient point guard. Names such as Iman Shumpert, Langston Galloway, Shane Larkin and Jose Calderon were consistently and glaringly outplayed by the opposition in recent seasons. Meanwhile, Derrick Rose proved to be serviceable offensively as the Knicks’ primary point guard last season but was horrendous on the defensive end.

Markelle Fultz, 6-foot-4, of the University of Washington, expected to be selected by the Philadelphia 76ers with the No. 1 overall pick, 6-foot-6 Lonzo Ball from UCLA and 6-foot-4 De’ Aaron Fox from Kentucky, all of them 19-years-old, who played only one season in college, will be off the board by the time the Knicks are on the clock. But either Frank Ntilikina, a 6-foot-5, 18-year-old prospect from France, or Dennis Smith, a physically explosive 19-year-old from North Carolina State, likely will be available for their taking.

The Knicks also must find an athletically superior two-way wing player who can score from all three levels as well as effectively defend at least three positions. Players in this category such as Kevin Durant, LeBron James, Paul George, Kawhi Leonard and the Minnesota Timberwolves’ rising star Andrew Wiggins are as coveted as elite point guards.

Duke’s 6-foot-8 freshman Jayson Tatum and Kansas’ 19-year-old one-and-done Josh Jackson readily fit the bill. However, they will already have heard their names announced by NBA commissioner Adam Silver when the Knicks make their pick. That places Kentucky’s 6-foot-3 shooting guard Malik Monk and Arizona’s 6-foot-11 forward Lauri Markkanen from Finland as strong possibilities to be fitted for a Knick uniform.