A message from Okwui Okpokwasili 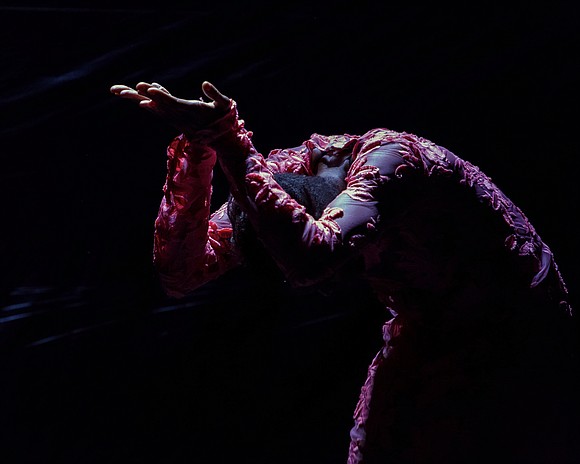 A close look into Okwui Okpokwasili’s eyes at the end of a performance confirms how completely she commits to the message in her work, and likewise embodies characters that she creates. She is genius in that way. Okpokwasili, a Stryker/Ranjelovic resident commissioned artist, presented the culmination of her two-year residency at New York Live Arts with the New York premiere of “Poor People’s TV Room,” April 19 to April 22. The by-invitation only program was created in 2011 to provide administrative support to artists such as Okpokwasili, so that they can simply make work. “Poor People’s TV Room” was loaded with Okpokwasili’s touch, and is a good example of time well spent. Even more, Okpokwasili, the daughter of Nigerian parents, proffered her message with an all-female cast of “brown women”—South African-born Thuli Dumakude, Katrina Reid, Nehemoyia Young, plus Okpokwasili. “In Poor People’s TV Room,” these women tell the story of the African woman’s plight. Longtime collaborator, director and visual designer Peter Born helped craft the visuals that shifted from real to surreal. Across the back, a large plastic wall made the space seem endless, close to the audience on the left were two chairs and on the right were a large table, a hanging lamp and chair. A monitor showed an ambiguous live feed of the

activities on the right.

“Poor People’s TV Room” was inspired, in part, by the “Women’s War of 1929” (or “Women’s Egwu”—dance or performance) in Nigeria, and although there were pockets of specially positioned moments, movement, text and original songs by Okpokwasili that pulled us one way or another, it was compulsory that we paid full attention to everything. We were voyeurs in Born’s multilayered room, watching and listening to Okpokwasili’s complicated and dense discourse on “…cultural and historical memory [her] rumination on absence…” and the Bring Back Our Girls Movement. From the beginning, Okpokwasili’s bare-chested, quick-paced rush from one side to the other behind the plastic wall until exhaustion, drew us in. Then, in front of the wall of plastic, where working in pairs for most of the time, Dumakude and Young were together on the left, and Okpokwasili and Reid were on the right—our eyes volleyed back and forth so that nothing was missed. But there was so much. She had our attention, and in a most gentle way, mixing humor with cause, Dumakude, drew a laugh when she said, “There was a time, way back, when Oprah was a human being, just a woman. She felt pain and she suffered.” Another time Dumakude (the elder) and Young (maybe the daughter) held hands, mirrored each other, and caressed a cheek or a shoulder, while Reid (mother) comforted Okpokwasili (the child) as she lay under her breasts. Interspersed are chants, clapping, vestigial gestures and heart-wrenching dialogue that drove Okpokwasili’s cry forward. In all, we gleaned the importance of listening, knowing and finding compassion for this cause.