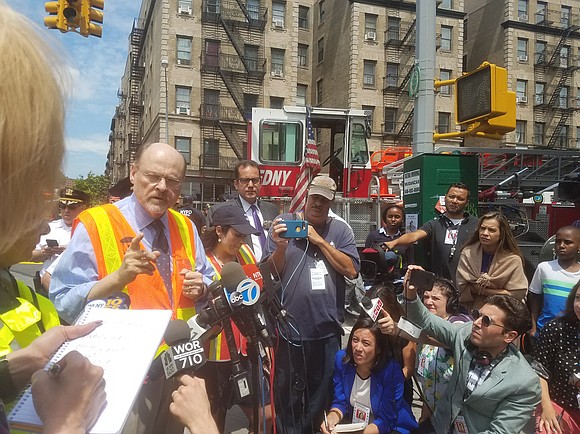 “I am calling on State Comptroller Thomas DiNapoli to audit the MTA now!” Ydanis Rodriquez, City Council Transportation Chair told the Amsterdam News, shortly after Tuesday’s derailment, on the corner of 125th Street and St. Nicholas Avenue in Harlem.

“There are unsecured spare rails all over the system,” revealed Roger Toussaint, president of New York’s TWU Local 100 from 2001to 2009. Speaking exclusively to the Amsterdam News, the director of Strategic Planning at TWU International Union from 2009 to 2012 charged, “Dozens of trains passed over the one in question. It gradually ‘walked’ its way into the path of the train.”

Wednesday morning, the MTA announced, “The two supervisors who were responsible for oversight of the work have been suspended without pay pending a formal review process [and final outcome of the investigation].”

Previously the MTA issued a statement saying, “There is evidence the rail was improperly secured, which is why we made the statement we did last night. There are proper protocols to ensure equipment is fastened and cannot shake loose and that equipment which is too small to be safely stored is never stored in between tracks. Those protocols were not followed, according to our preliminary investigation.”

By Wednesday morning, however, quicker than most people anticipated, repairs were done and trains were up and running for the most part. The incident had caused a massive commotion at 125th Street and St. Nicholas Avenue, with 34 people injured, and the subway system experienced wide-ranging service disruptions.

MTA Chair Joe Lhota said at a news conference Tuesday that the incident occurred at 10:15 a.m., when the train’s emergency brake was pulled, resulting in two trains derailing. An investigation into what happened and the extent of the damage continues. Fire officials said that 17 people were being treated at hospitals for non-life-threatening injuries. Several passengers had to be evacuated from trains that were stuck because of the derailment. Train service was also tied up during the morning commute, leaving many straphangers stranded or having to look for travel alternatives.

As 125th Street Business Improvement District noted Tuesday, there was an “ongoing investigation by MTA and other government agencies [FDNY, NYPD, OEM and EMS].”

As the smoke cleared, literally, Rodriguez said, “With this latest incident, there is no longer any question over whether MTA is in a moment of crisis. What we need now is real leadership that focuses on the safety of riders and a comprehensive plan to upgrade our failing signal systems across the city. I am also calling on Comptroller DiNapoli to do a line-by-line audit of the MTA and their capital programs, to be sure that our dollars are spent in the most effective way possible, to ensure riders are safe and our system is functioning at an optimal level.”

He held a news conference Tuesday and called for “emergency repairs to the subway system and for the state to declare the system in a moment of crisis.”

Tuesday, though, nothing much was heard from Mayor Bill de Blasio, aside from a retweet about being briefed and monitoring the situation, and New York State Gov. Andrew Cuomo, with whom the mayor is having a prolonged spat, was in town but also did not appear on the scene or make a public pronouncement.