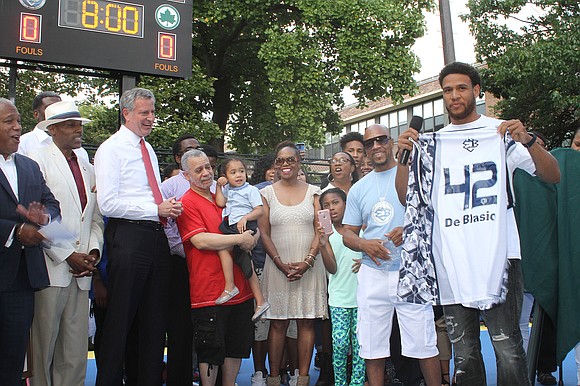 Greg Marius, the founder and former CEO of the Entertainer’s Basketball Classic at Rucker Park, was honored this past week posthumously by Mayor Bill de Blasio with the naming of the famed park’s main basketball court the Greg Marius Court.

The basketball pioneer and visionary succumbed to a long and courageous battle with cancer at age 59 in April. Several of Marius’ family members, longtime friends, current and former athletes, celebrities and politicians were on hand to pay their respects and take part in the commemoration.

New York City Parks Commissioner Mitchell J. Silver, City Councilman Andy King and State Senator Brian A. Johnson were among those in attendance to memorialized Marius. A representative from the Knicks presented a $5,000 check on behalf of the franchise, and Brooklyn basketball great Albert King pledged a $5,000 donation on behalf of himself and the Brooklyn Nets.