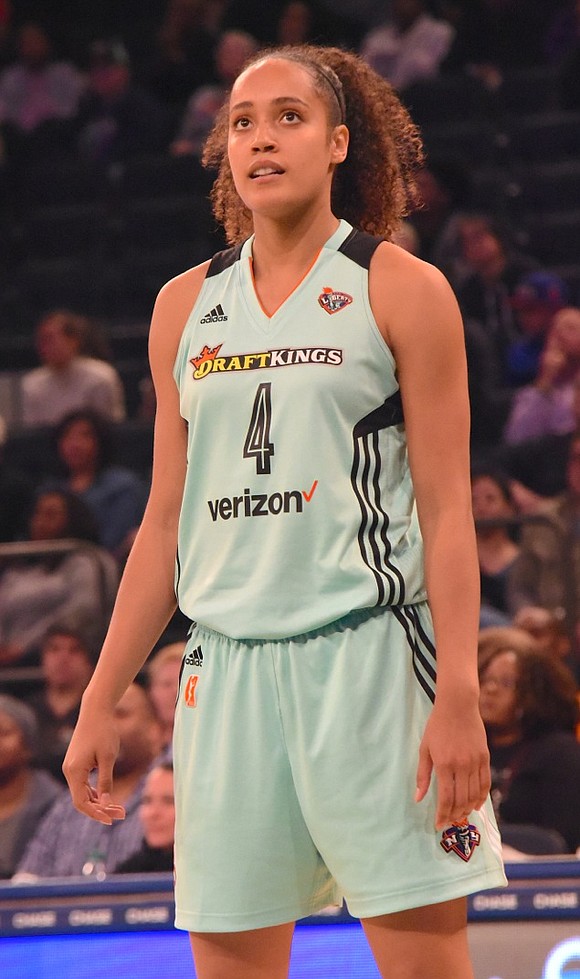 The crowd was more than 10,000 strong, some of them rocking super cool rainbow sunglasses courtesy of Resorts World Casino NYC. Others in attendance bore the NOH8 message on their faces. Celebrities sat court-side, including cast members from the hit show “Orange Is the New Black.” Iconic dance music singer/songwriter Crystal Waters performed at halftime. Last Friday’s Pride Night at Madison Square Garden was almost perfect, except that the New York Liberty lost to the Connecticut Sun 94-89.

“Connecticut played a very strong game all game long,” said Liberty coach Bill Laimbeer. “We have to value the basketball more—giving up 28 points off turnovers and 21 points on offensive rebounds was our undoing. That’s what cost us the game.”

Kia Vaughn and Epiphanny Prince returned to the lineup after spending several weeks in Europe. Prince contributed 14 points, five rebounds and three assists. Huge baskets from Bria Hartley and Shavonte Zellous late in the fourth quarter brought victory within sight for the Liberty, but the Sun pulled away in the final minute.

“We came out strong,” said Sun center Jonquel Jones, the second player from the Bahamas to play in the WNBA. “Today we learned a little bit about making sure that we’re really focused coming into that last quarter. We were still able to pull it out.”

“We knew the crowd was going to be loud for Pride Night,” said Sun guard Alex Bentley, who met the celebs before heading to the locker room. “Those are the atmospheres you live for. We love playing basketball and we love this big stage.”

On Sunday, for the first time in team history the Liberty had its own float in the NYC Pride March. Players, members of the Torch Patrol and Maddie were on hand. The NBA/WNBA also had a float. This participation is a joyful departure from how the league treated its die-hard LGBT fan base in its first decade and marks a significant change for the Liberty.

“Performing at Madison Square Garden felt 100 percent pure amazing,” said Jeff Cowans, one of Waters’ dancers and a native New Yorker. “For me, Pride means a lot. To be a part of this in a time where more people are having more pride in themselves is just amazing. I’m glad I got to be at a game, see it this way and participate.”