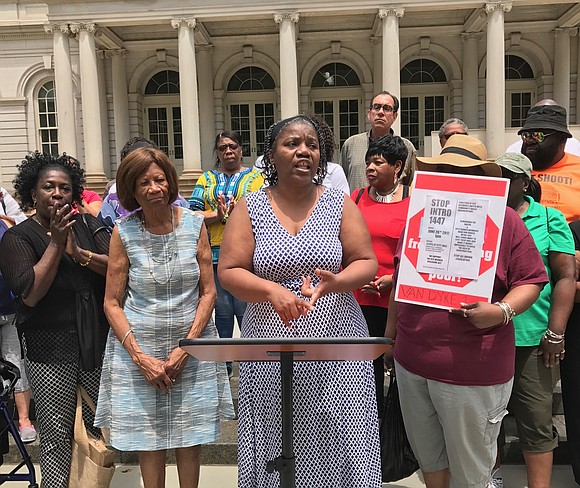 The NAACP, NYCHA tenants and advocates gathered at City Hall Monday to speak out against a potential law requiring apprenticeships for construction workers. The bill (Intro. 1447), which currently has the support of the New York City Council, comes as a result of an increase in construction-related deaths between 2011 (17) and 2015 (25).

Whereas construction firms with union support favor the bill, advocates stated that the bill would add an extra barrier for Black and Latino New Yorkers looking for construction jobs, but don’t have any union connections.

Charlene Nimmons, the executive director of Public Housing Communities, Inc., said to reporters that 1447 will shut the poor out of jobs and Blacks and Latinos in particular.

“We’re here to say stop 1447 because it’s gonna have a negative impact around the city,” said Nimmons. “Constantly, funding comes in to the city and too many times we don’t get access because there are restrictions on training. There’s restrictions on access. We’re asking that Mayor de Blasio and every City Council member supporting 1447 hear us an understand. You say you represent us. We’re are telling you today that if you pass that bill, it will cause people to lose jobs, and it will cause people who are looking for jobs to not have access.”

During the City Hall news conference, advocates announced that they had gathered thousands of signatures on a petition opposing Intro. 1447 and are calling for a meeting with Mayor de Blasio and the City Council.

Nimmons, who said the City Council promised them a meeting but never contacted them, called out de Blasio’s administration for not practicing what they preached.

“This administration is supposed to be progressive,” Nimmons added. “So you’re supposed to be figuring out ways to help us end poverty, not continue to have us stricken by poverty.”

NAACP New York State Conference President Hazel Dukes lent her support to the cause as well. At City Hall, Dukes discussed how the best ways to get out of poverty have been blocked for those who are actually in poverty.

“When we talking about people getting out of poverty,” said Dukes. “There’s two ways you get out of poverty: education and employment. We’ve looked at 1447. There are barriers there. Why would we have our City Council people giving to the mayor something that overrides the federal level?”

Audrey Henry, president of the Findlay Avenue Tenants Association in the Bronx, handed a statement to the AmNews about the plight of some NYCHA residents who apply for Section 3 positions.

“If [a] NYCHA resident applies for Section 3 positions, they are denied employment due to the fact they are not union members,” read the statement. “Section 3 law states that as long as you are a NYCHA resident, and any contractor is awarded federal funding contracts over $800,000, a resident must be hired.” Henry’s statement blamed the city for causing “this hardship.”

Advocates told the AmNews at City Hall that Intro 1447 does nothing to increase workplace safety and everything to exclude Black and Brown workers from constructions gigs.