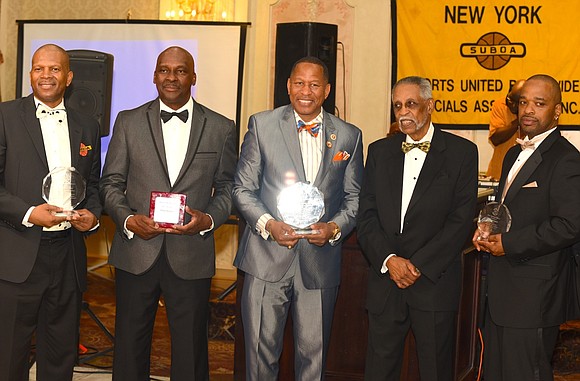 Of course they’ve made a bad or questionable call or two. That’s to be expected over a period of 50 years, but there’s no question about the dedication, qualifications and professionalism of the members of New York Sports United Boro-Wide Officials’ Association, a fraternity of basketball officials who’ve refereed basketball games on cemented playground courts throughout New York, to the polished hardwood floors of Barclays, the Garden and beyond. Bill Modess and Ray Jones, two of their most distinguished, long-standing members, have even officiated a game in scenes from “Finding Forrester,” a feature film starring Academy Award-winning actor Sean Connery, the original James Bond.

Members of SUBOA payed homage to  themselves Friday night with a celebratory banquet at Villa Barone in the Bronx, a five-hour gala to commemorate their golden anniversary honoring their last remaining founder, John Purvis, a retired Borough Director for NYC Department of Parks and Recreation; member Kelsey Stevens, director of Sports, Recreation and Fitness – Children’s Aid Society; Tony Romaine, employee of the New York City Transit Authority, voted the Most Improved Official; Andy King, a Bronx City Council member; the Amsterdam News’ own, Howie Evans, our sports editor, recognized for his assistance in SUBOA’s formulation at inception; and member Dana Harper, a retired NYPD detective who received his Official of the Year Award to rousing applause from the banquet hall filled with SUBOA officials, family members and friends.

“I tried to represent the organization and myself to the best of my ability,” said Harper as he graciously accepted his award. Harper, a member for 21 years, added, “I’ve only joined two things in my life, the NYPD and SUBOA.”

Purvis, a respected former high school and NCAA Division 1 official now retired in Charleston, S.C., established SUBOA with Billy Clarke, Rosier Hansborough, Rudolph Mims, Richard Reed, Victor Jefferson, James Murray and Robert Ware to train African-Americans and other minorities in the art of officiating, and to provide and assist them with opportunities in this field.