Mahershala Ali: A man of peace and gratitude 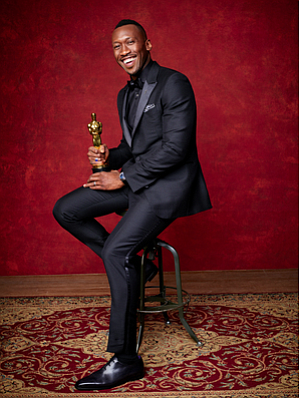 Mahershala Ali poses backstage with the Oscar for Performance by an Actor in a Supporting Role, for his work in “Moonlight” during the live ABC telecast of “The 89th Oscars” at the Dolby Theatre in Hollywood, Calif., Sunday, Feb. 26, 2016.

Mahershala Ali has a regal aura. It’s in the way he walks, stands, listens and speaks. Here is something else: He emits gratitude, and not the false type in which he loads his acceptance speech with a laundry list of industry acknowledgments.

“Moonlight” earned three Oscars, unseating its rival “La La Land” with a disturbing hiccup when veteran actor/producer Warren Beatty and Faye Dunaway pulled a “La La Land” card out of a red envelope. There was a “mistake”—sigh—and in the end the right film won Best Picture—“Moonlight.”

At the end of the evening, when all of the invited guests and Oscar winners were hugging their golden man, Ali took the time, between drinking a warm cappuccino, to thank the African-American press and more to the point, to take pictures with his Oscar.

Here is an excerpt from Oscar winner Ali on being a part of “Moonlight.”

AmNews: You made history being the first Muslim actor to win an Oscar. What are your thoughts on this historic note?

Ali: Well, regardless of one’s theology or however you see life or relate to worshipping God, as an artist my job is the same and it’s to tell the truth, and try to connect with these characters and these people as honestly and as deeply as possible. And so one’s spiritual practice I don’t—I don’t necessarily feel like it’s as relevant unless it gives you a way into having more empathy for these people that you have to advocate for. So, but I’m—I’m proud to own that. And I embrace that, you know. But, again, I’m just an artist who feels blessed to have had the opportunities that I have had and try to do the most with every opportunity that’s come my way.

AmNews: What went through your head when you read the script [“Moonlight”].

Ali: Well, I sincerely say that when I read the script, look, I don’t get to read everything, because there’s things that I’m just not remotely right for, you know. Ryan Gosling and I read different scripts. It’s just what it is, right? But in terms of the—as far as the scripts that I’ve read in my 17 years of doing it professionally, “Moonlight” was the best thing that I’ve—that has ever come across my desk. And that character for the time that he’s—that he was on the page really spoke to my heart, and I felt like I could—I could hear him, I could sort of envision his presence and I could—I really had a—I had a real sense of who that person was, enough to start the journey. And I really wanted to be a part of that project, and I’m just so fortunate that it—that Idris and David Oyelowo left me a job.

AmNews: Here at the Oscars, this is a time capsule. What would you tell—which would you like to tell your new daughter right now in this world, that fatherly advice?

Ali: Just pray to be guided to your excellence. That’s it.

AmNews: Who are your role models, those that you have idolized and you have patterned yourself after?

Ali: Denzel Washington because, one, he’s just so damn talented. But, then, two, to see someone who comes from your tribe, so to speak, play at the level of all the other great ones and do it so well and be able to have—articulate his voice and his talent in a way that was on par with the very best and he looks like you, too. You know what I mean, in that like, wow, there's somebody who could be an uncle of mine. Like, those are things that—that play in your mind as you—as you move forward, you know. And also what I love about Denzel is not that he’s a great Black actor, he’s a great actor. And I’ve never —I’ve never looked at myself as a Black actor. I’m an actor who happens to be African-American, but I just want an opportunity to respond to material and bring whatever—whatever I bring to it in some unique fashion, and that's it. But basically short story long, Denzel.