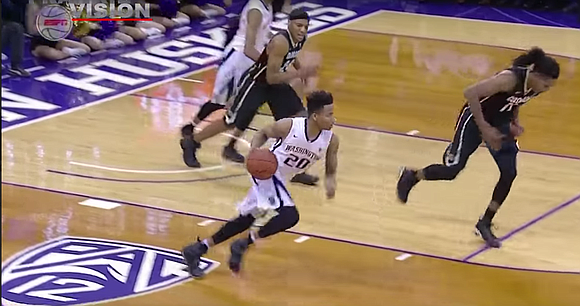 The NBA one-and-done rule, collectively bargained by the NBA owners and the NBA Players Association in 2005, is now in its 11th year. Fundamentally, the clause, stipulating that prospects be at least 19 years old and a year removed from high school to be eligible for the league’s annual draft, has little efficacy for the NBA.

The National Collegiate Athletic Association is the primary beneficiary of having the best high school talent in the country play in college for what amounts to roughly six months before they are jettisoned to elite training facilities far from their campuses before the conclusion of their academic schedule to prepare for the draft.

Current projections have freshmen as nine of the top 10 picks in this year’s draft, led by the University of Washington’s 6-foot-4 point guard Markelle Fultz going No.1 and UCLA’s 6-foot-6 point guard Lonzo Ball in the No. 2 slot. The only non-freshman playing at a United States college expected to be selected in the top 10 is 6-foot-5 point guard Frank Ntilikina from France, who happens to be the same age—19—as most of the other freshman prospects.

Whether any of them played a single day of college would almost certainly have no bearing on their impending status as likely high first-round picks. All of the best players in American high schools—nearly all of them Black—and every elite teenage prospect abroad are intensely scouted by every NBA team well before they reach 18.

While most NBA fans had no clue who Knicks 7-foot-3 center Kristaps Porzingis was before the 2015 draft, all of the league’s 30 franchises knew what the young Latvian playing pro ball in Spain ate for breakfast, lunch and dinner. Knicks president Phil Jackson is lauded for drafting Porzingis once it became common knowledge the young man was supremely gifted, but to the basketball cognoscenti he was anything but a sleeper pick.

Scour some of the rankings for the best ninth- and 10th-graders in the country and rest assured NBA teams already have a keen eye on them. Not to mention the relationships all of the leading sports apparel companies have developed with many exceptional young ballers even before they begin high school.

In essence, the cream of the crop talent is treated like pros years before they become draft eligible.

The one-and-done rule is a farce. If everyone involved on both the pro and collegiate levels were administered truth serum, they would admit that less than a single year in college does little to prepare future NBA players for life both on and off the court. But the rule will not end with the advent of the soon to be etched-in-stone new NBA collective bargaining agreement. The charade will simply continue.