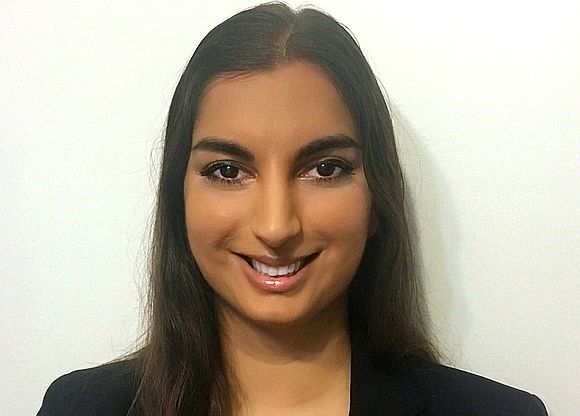 A fourth-year medical student at Touro College of Osteopathic Medicine has won first place in a poster competition for her research on the effects of teaching about healthy diet and nutrition at a Queens homeless shelter. The award was presented at the recent 61st Midwinter Conference of the Texas Osteopathic Medical Association in Dallas.

Gayatri Malhotra-Gupta said her research grew out of her community service work and interest in studying the need for nutrition education programs in homeless shelters and whether they would have an impact long-term.

“I wanted to see whether it would make a difference,” said Malhotra-Gupta. “A lot of the participants were never screened for diabetes though they were overweight and had risk factors. We educated them and showed them how to build a healthy food plate.”

Fifty women and children living at the shelter in Astoria, Queens, participated. Volunteers gave the residents a presentation on healthy eating and the different food groups. Adults were screened for prediabetes, taught how to calculate their body mass index and counseled on how to make healthy meals and monitor weight. Children were given worksheets on healthy food choices that they filled out in small groups and were shown tai chi exercises and taught the importance of daily exercise.

“We know we had a positive impact on their knowledge from the surveys we got back,” said Malhotra-Gupta, who explained that after the program, a majority of responders said they had a better understanding of the topic and were better able to identify foods from the food groups and use them to make a healthy plate. Specifically, they learned to “eat more fruits and veggies” and to exercise, she explained.

However, there were challenges. Only 20 percent of the participants responded to the surveys. And as far as gauging any long-term impact, that seemed unlikely, she said. When the organization returned to the shelter to do a program on hygiene, half of the residents had moved on.