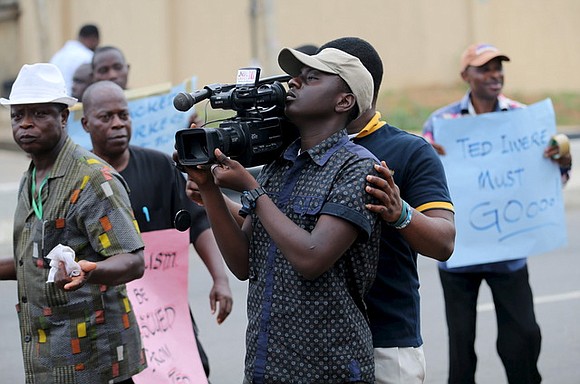 Members of the media Contributed

Peter Pham, vice president and Africa director of the Atlantic Council in Washington, D.C., is reportedly seeking a position.

In a strategy paper prepared for the Trump administration, Pham proposed an initiative he calls “earned engagement.”

The U.S., he says, should grant diplomatic recognition only to governments with legitimate sovereign control over their countries. Somalia, for example, would not be among those countries, having had 15 transitional governments after the collapse of the Siad Barre regime in 1991. None of these governments were recognized by Republican or Democratic administrations.

Recognition might also be withdrawn from the Democratic Republic of Congo if President Joseph Kabila fails to honor his commitment to retire this year after elections.

More resources would be channeled into AFRICOM, according to Pham, not only to address insecurity directly but also to continue to beef up African militaries.

Other clues to the president’s Africa plans appeared last month in a New York Times article that revealed a retreat from development and humanitarian goals while pushing business opportunities across the continent.

New executive orders are reportedly being prepared with drastic funding cuts to U.N. peacekeeping operations—now almost a third of which are funded by the U.S.—the International Criminal Court and the United Nations Population Fund, which oversees maternal and reproductive health programs.

Anton du Plessis, head of the Pretoria-based Institute for Security Studies, fears that Trump will “securitize” U.S. policy, funding and engagement in Africa, focusing heavily on security problems such as Boko Haram, while ignoring efforts to create stability in the long term through democracy, good governance and sustainable development.

Among such efforts would be one of former President Barack Obama’s most successful programs, the Young African Leaders Initiative, which brings several hundred young African professionals and entrepreneurs to the U.S. for six weeks each summer.

“It is possible that Trump’s term in office will surprise us on Africa,” observed former U.S. Assistant Secretary of State for African Affairs Johnnie Carson. “Republican administrations have outperformed on this front before. President Bush certainly did, and his two landmark initiatives—PEPFAR and the Millennium Challenge Corporation—remain extremely popular.”

But given the absence of any serious White House interest in Africa, Secretary of State Rex Tillerson, with limited knowledge of Africa after having dealt mainly with corrupt and authoritarian leaders as head of ExxonMobil, may become the key American player on Africa.