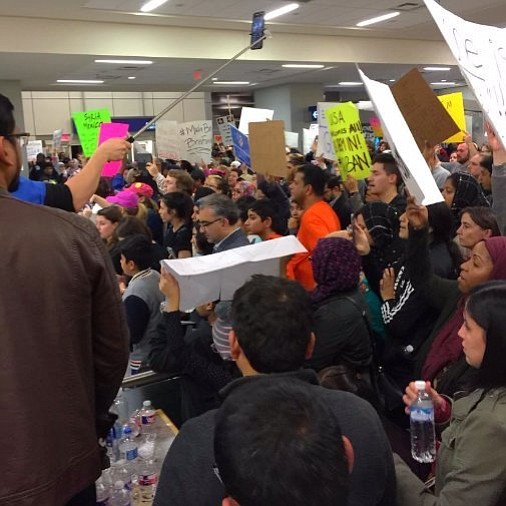 "We were kind of beset on all sides. There was just a lot going on," Owings said.

There was also a lot going on in her personal life. She spoke to her parents on the Sunday after the ban and learned that her grandmother, who is 92, had been unresponsive for about 45 minutes earlier in the week.

Nearly three weeks later, Owings drove eight hours to Monroe, Louisiana to see her grandmother on February 17. They spent a day together. She told her grandmother she loved her.

Then she drove back at Atlanta to plan her chapter conference and to be ready in case the new version of the ban came down that week.

"There's no more time to miss anything that's going on," Owings said. The last month has been like "a marathon with no clear path to the end of it."

Vyas, 44, said she wasn't sleeping much in the first few weeks after the immigration orders. Her work load increased and she spent time reading immigration law listservs and following news reports on the ban. She said she felt like her nearly 19 years of immigration law experience flew out the window.

But she set a routine of going to bed earlier, and has stuck to it.

'I'm getting up at 5 a.m. so that I can actually crack open the laptop to get work done," said Vyas, who represents immigrant survivors of crime and asylum seekers. "And I am pretty much working seven days a week."

Now she is glad for those years of experience. "I think that experience now is starting to kick in where now I can really try to think more critically and be more strategic for my clients," she said.

Some clients have shown up without appointments. Her calls have more than doubled to 10 to 25 day. Sometimes one person may call multiple times, she said

"The fear has been tremendous," she said.

One client, an Iranian native, worried about how the Trump's pending second travel ban would impact her ability to get legal status, just wanted to hear Vyas' voice.

"Thank you once again for your positive energy and optimism," Vyas recalled the woman saying.

She returns more calls after hours just in case someone has been detained or needs her to ease their fears.

In hectic moments, she said she has felt as if her office was a medical facility. She found herself counseling clients, many of them asylum seekers and survivors of crime, who are already anxious and stressed out.

To alleviate her stress, she has turned to yoga and meditation.

"I feel like it's working. I'm trying to be really disciplined and strict about doing my 10 minutes of breathing exercises every morning," she said.

'Never seen this level of energy'

On the day after the initial ban, Azadeh Shahshahani, a legal and advocacy director for Project South, an Atlanta-based social justice organization that works with immigrant and Muslim communities in the southeast, recalled getting roughly "a message a minute" on Facebook, on her voicemail and inbox.