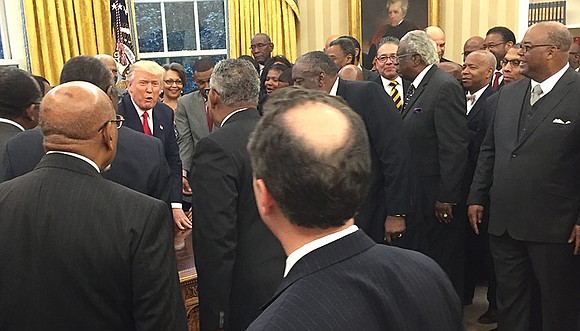 BALTIMORE (CNN) -- Rebecca Phillips' family has been attending Morgan State University in Baltimore for four generations. The 21-year-old college senior brims with pride when she talks about the college she'll graduate from in a few months.

"We're turning 150 this year and we have so much history. We are the first HBCU to be named a national treasure," she said during a recent interview. "Oh we love saying that to other schools, we are the bomb."

Morgan State University is one of more than 100 federally designated historically black colleges and universities, schools. To be named an HBCU, a college must have opened prior to 1964 -- the year that the Civil Rights Act passed. All share the same goal: educating black Americans seeking higher education who were shut out of predominately white institutions due to segregation.

For years, historically black schools have struggled to survive, fighting for their share of government funding and lagging behind predominately white institutions when it comes to endowments. While many predominantly white institutions were established with the goal of educating the nation's elite, historically black schools have taken on the neediest of students.

But President Donald Trump says he wants to "ensure funding" for these institutions, which enroll more than 293,000 students according to the National Center for Education Statistics.

Morgan State's president was among the dozens of HBCU leaders invited to the White House for a listening session in late February. They met with top members of Trump's administration including Vice President Mike Pence and education secretary Betsy DeVos. The meeting has been met on HBCU dcampuses across the country with frustration, and in some cases anger, from students who believe the administration has been inconsiderate of African Americans.

Philips said she was initially "beside herself" when she heard that HBCU presidents would meet with members of Trump's administration but acknowledged the "enormous responsibility" that university presidents face to ensure their institutions survive.

"It just shows that HBCUs have been so undervalued, underfunded and neglected that our presidents are willing ... to go to a man who has failed to disavow the KKK, who has advocated for the death penalty for five young men in the 1990s, who has shouted out in a crowd saying, 'Look at my African American,'" Phillips said. "The fact that we are in such a desperate need for funding that they find this to be an opportunity? That's what got me."

Phillips was referring to an exchange between Trump and CNN's Jake Tapper and it should be noted that later, Trump did disavow the KKK.

Interviews with students from historically black schools across the country revealed divisions, frustration and angst over the meeting and the future of HBCUs under the Trump administration.

At first, Marquise McGriff, a graduate student at Lincoln University of Missouri, tried to avoid thinking about the meeting at all. But when the photo of HBCU presidents gathered around Trump in the Oval Office emerged, he said it became harder to stay away.

"At first I thought, 'why are they there in the first place?" McGriff said, recalling the photo of Trump surrounded by smiling leaders of historically black schools. Ultimately though, he said that the meeting was an opportunity that HBCUs "couldn't afford to miss."

"I think they went for the best," McGriff said of the meeting with the Trump administration. "Sadly, we didn't get what we were expecting to get -- an increase in funding."

That has been the focus of HBCU leaders, who have implored the Trump administration for more government investment in their schools by way of federal contracts and grants. The executive order that Trump signed in late February, moving the White House initiative supporting black colleges and universities from the Education Department into the White House, did not include monetary support to the chagrin of some of those in the meeting.

Wilson, who met with a group of student leaders before agreeing to go to the White House, described himself as cautiously optimistic that White House senior advisers would be open to their request for dramatically increased funding from the federal government.

Many of the college presidents who attended the meeting are calling for more funding, including a one-time $25 billion infusion to fund infrastructure, technology and financial aid. Thurgood Marshall College Fund President Johnny Taylor said the $25 billion is needed to "get our schools back to the point where they can reasonably be expected to compete with other institutions."

He said he's not talking about being competitive with Ivy League universities.

"I'm talking about just getting on the same level as solid state schools." he told CNN.

Wilson said he saw the meeting as a positive first step toward fixing what he described as historic underfunding of HBCUs and that they would be looking to see if the President's budget places HBCUs as a priority.

Some of the other presidents in attendance echoed his sentiments.

"They seemed genuinely interested in the needs of HBCUs and the kind of support that would help us to better serve the mission of our institutions," said Mickey Burnim, he president of Bowie State University. "I didn't expect that."

But, he added, this is a "dollars issue."

"We received a very warm welcome...but the partnership itself, the strength of it over time, ...will relate directly to the funding and the access to federal dollars that emanates to the Trump administration."

Morehouse College President John Silvanus Wilson Jr., who led the White House HBCU initiative during President Barack Obama's first term, was less optimistic, calling the meetings "a troubling beginning to what must be a positive relationship."

In a letter to Morehouse's student body, Wilson dismissed the executive order signed by Trump as a purely symbolic gesture and said that if Trump truly wanted to "do more for HBCUs than any other president has done before" he should have announced a commitment of funding, as much as $500 million.

Walter Kimborough, the president of Dillard University in New Orleans took issue with the fact that the trip was billed as a listening session,but said that "very little listening to HBCU presidents" happened.

Discontent boiled over at Howard University last month, where Trump's newly minted education secretary made her inaugural outing in the post, meeting with the university's president, Wayne A.I. Frederick. She drew criticism from some students who believed their campus was being used as a photo op.

Students at Howard protested last week, disrupting the campus convocation and holding signs that declared "Trump is not welcome at Howard." Images of disparaging graffiti on the university's campus that read "Welcome to the Trump Plantation. Overseer: Wayne A.I. Frederick," quickly went viral on social media.

As of Monday, more than 1,000 people had signed an online petition calling for the creation of a student led "oversight committee"at Howard to make recommendations on how funds from the Trump administration should be used.

"We get that they have a job to do, it's a tough job to keep an HBCU open. But there is still an obligation to the values that have sustained us for 150 years" said Howard University senior Allyson Carpenter. Those values, according to Carpenter, who is the president of Howard's student association, include "advocating for the people who have been marginalized and overlooked and not heard."

Students, including Carpenter, have been sharply critical of DeVos's statement last week lauding the schools of "real pioneers when it comes to school choice." Many saw her comments as ignorant of the fact that many historically black institutions were in fact founded because black students were not allowed to attend segregated white schools.

For her part, Carpenter said that DeVos's comments showed her "apparent ignorance"about HBCUs.

"This is just further proof that they don't understand HBCUs, but also that they're using HBCUs for an ulterior motive,"Carpenter said of the Trump administration. "She's talked a lot about school choice, but I've never heard anyone use HBCUs as a vehicle to promote school choice before."

In a letter to the editor in Howard University's student newspaper, Frederick rejected calls by some students to reject any funding from the Trump administration --- Howard is the only HBCU that receives an annual federal appropriation --- saying that it is "appropriate...that the American government uses federal funding to support institutions like Howard."

"That doesn't mean we compromise our values," Frederick wrote. "Rather, it requires us to boldly affirm who we are and what we stand for while committing to real action."

Carpenter said she isn't opposed to her university having a relationship with the Trump administration, but she said that it should be dictated by Howard and not the White House.

"I know we have to work with the federal government, but we should not offer them our partnership or offer to be supportive until they address the legitimate concerns that the people in our community have," she said. "... It should be a relationship on our own terms. And we should not ever deviate from speaking truth to power because we're worried about our appropriation."