ORLANDO, Fla - The Walt Disney World Resort welcomed the 100 teens selected to participate in the 10th Disney Dreamers Academy with Steve Harvey and ESSENCE Magazine on Thursday. Four of the students selected are from the New York-metro area

The Dreamers participated in a parade on Main Street in the Magic Kingdom theme park on Thursday. The parade featured Steve Harvey along with Disney characters and former Dreamers.

In the evening, the teens and their parents attended a welcoming ceremony at Epcot Center where speakers included Harvey, gospel singer Yolanda Adams and President of Essence Communications, Michelle Ebanks.

This year's group traveled from across the nation for the all-expenses paid trip to Disney World. Over the next few days the teens are participating in hands-on workshops in fields they selected. Experts, motivational speakers and celebrities will serve as their mentors and instructors. 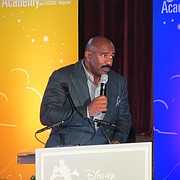 Celebrating a milestone year, the Disney Dreamers Academy is in its 10th year taking on 1,000 students over the last decade. One alum from every past Academy is participating in this weekend’s activities.

“It’s been 10 years of progress and 10 years of results,” he said. “This is doing a lot of great things for a lot of young people’s lives. You’ve got to expose young people to dreams. If you sat down with a child every 30 days and discussed their dreams, you’d be amazed of what you can get from a child.

Ebanks said the Dreamers Academy is about making a difference in the lives of the teens so they have the skills to pursue their own success.

“What has been remarkable is Disney’s commitment,” she said. “This world class corporation is taking the time and putting in their treasure against the lives of these now 1,000 youth.”