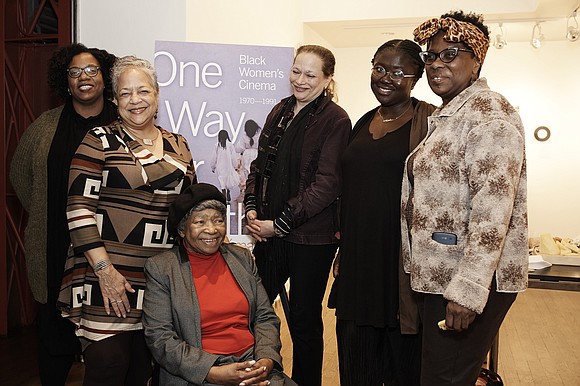 Among other things, “Daughters of the Dust” is a film deeply concerned with making sure that history and culture are not lost. It is beyond fitting, then, that it was the closing-night film for BAM’s film series, “One Way or Another: Black Women’s Cinema 1970-1991.” The series chronicled Black women’s achievement in filmmaking between 1970 and 1991, the year in which “Daughters of the Dust” was made. With “Daughters of the Dust,” director Julie Dash became the first Black woman to have a feature film in wide theatrical release.

Great wine and even better conversation flowed at the reception after the screening. Series curator Michelle Materre recalls the process of coming up with the slate of films that made up the series.

“The idea for the series came about because of the rerelease of ‘Daughters of the Dust.’” said Materre. “It’s the celebration of the 25th anniversary, and the idea is to show that there has been a continuum of Black women filmmakers preceding ‘Daughters of the Dust.’ People think that the Black independent women’s film movement started with ‘Daughters of the Dust,’ but that, as this series tells us, started in 1970 and before. But we started in 1970 and up to ‘Daughters’ to show the range of work, the quality of the work and how this was the breakthrough moment for independent filmmaking for women who very rarely got the attention that the male filmmakers did.”

Renewed popular interest in “Daughters of the Dust” came about with the release of Beyoncé’s “Lemonade” visual album. Those familiar with Dash’s film couldn’t help but notice the visual references to that film in Queen Bey’s video. The restoration and rerelease of the film by Cohen Media Group was already in the works at the time “Lemonade” was released, but the album certainly helped generate more interest in the iconic film. It will be released on DVD and Blu-ray April 11.

Also on hand at the reception was actress Aunjanue Ellis (“Quantico,” “Birth of a Nation”). She believes that films such as those screened in this series are valuable, whether or not they are recognized by Hollywood. She said, “Our creativity should not be dependent on whether they are pleased with it or not. Historically, we have had so many films that should have been nominated, made by Black folks, starring Black people going back to the beginning of cinema that should have been in these conversations, but they weren’t. So the Oscars it’s nice, but it’s not a measure of how excellent we are. Having said that though, it is wonderful and I just hope that it continues because things can be so up and down.”

Pioneering documentary filmmaker Madeline Anderson was also at the reception. She held court among the various filmmakers and film enthusiasts and shared her experiences as a filmmaker during the civil rights era. Anderson was the first African-American female executive producer of a children’s series, “The Infinity Factor” on PBS. It was a children’s program aimed, as the title suggests, at teaching math and science.