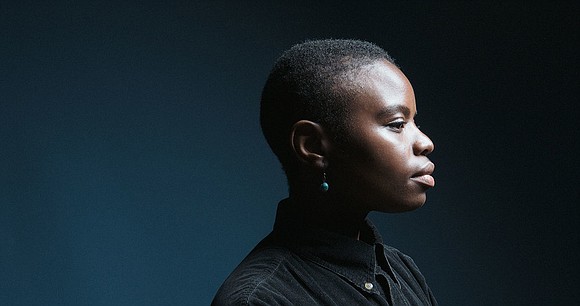 It is important to mention how beautiful the 24-year-old New York-based indie rock artist Laetitia Tamko is. We don’t announce and pronounce the beauty of stunningly individual Black women. Hailing under the musical moniker Vagabon, Tamko makes pounding rock songs that sit below her whisperingly unique voice, which yelps with longing and sincerity. She’s got a distinctive voice like Sade or Mya. Once you hear it, you won’t mistake it for anyone else. She sounds youthful, but it’s understood that her voice is stylistic as opposed to raw and untrained.

“When I was in Cameroon, my mom would have these ‘reunions,’ which was just her friends coming over on Sundays,” said Tamko, who immigrated from Cameroon to New York when she was due to enter high school. “There was a lot of music around me. Traditional West-African songs sung as group chants, hand drums and percussive instruments being played, etc.”

Ironically, her music doesn’t sound anything like the African music she grew up around. Vagabon’s new album, “Infinite Worlds” (Father/Daughter Records) was released Feb. 24. As a multi-instrumentalist and producer, Tamko recorded her album in New Paltz, N.Y., with engineer and co-producer Chris Daly, working to create airy rock ballads that are filled with complex lyrics.

In “Cleaning House” she sings, “What about them scares you so much?/My standing there threatens your standing, too/No longer yearn to be gentle, pure, sweet, not intimidating yet sure/If I lived the way you did, I wouldn’t be here today.”

Indulge in Vagabon’s music. She steps outside musical stereotypes, racial norms and expectations and creates a rock album that should be recognized for its uniqueness and ability to unapologetically break the mold of the type of music a Black artist should make in America.

Tamko is paving the way for the next generation of Black musicians, who will have the freedom to perform whatever genre they choose.