Slaves were immigrants, according to Dr. Carson 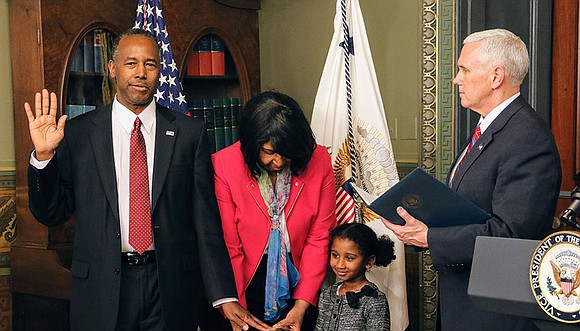 Dr. Ben Carson (left) was sworn in as the Secretary of Housing and Urban Development on Thursday, March 2. Carson’s wife along with his 5-year-old granddaughter, Tesora held the Bible. Shevry Lassiter/The Washington Informer

Dr. Ben Carson had hardly settled behind his desk as the new Secretary of Housing and Urban Development when he ignited another firestorm of reaction. Addressing employees at HUD Monday, Carson said that America was a land of immigrants, dreams and opportunities, which was OK. Then he veered into troubled waters.

“There were other immigrants who came in the bottom of slave ships,” he said, referring to the African captives, and adding that they “worked even longer, even harder for less.” For him to equate slaves who were brought to this country involuntarily with immigrants who came on their own volition was met with a strong response.

“You can’t be an immigrant if you’re brought here in chains,” a caller to Armstrong Williams’ show on Sirius XM Radio said, where Carson was appearing to discuss the controversy.

It was clearly an explanation without merit as Carson struggled to clear up a mess he had stepped into voluntarily.

Not only should he check out “Roots,” charged Whoopi Goldberg in a tweet, but also it has less to do with a strict, academic definition of immigrant, and more to do with a general understanding of the concept and its application.

For Carson to even say that someone chained in the bottom of a slave ship is an immigrant is a terrible disconnect and an insensitivity to the Black experience in America.

Ellis Island is one place and Jamestown is another, and to ignore the process of arrival is also to see a similarity in the consequences of the arrivals, and it’s not enough to say that Black Americans endured and prospered, despite the miserable beginnings.

Carson told Williams that the employees at HUD were right with him, on the same page of understanding where he was coming from. A further justification of his comments was offered when he told Williams of how and why the Africans did not die and succumb to the conditions they faced.

And, maybe, just maybe, a time will come when Carson will use his brain.