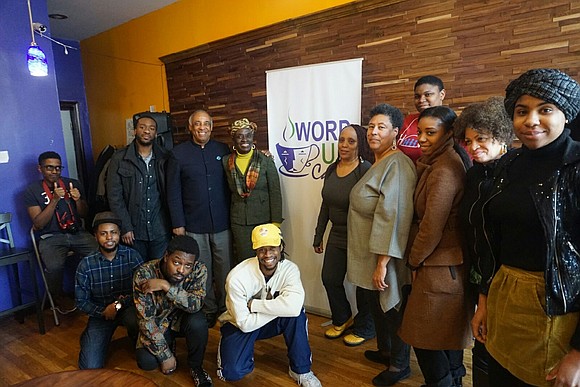 Saturday, Feb. 11, 2017, East New York Restoration hosted an open mic “Unity in the Community” at the local East New York shop, Word Up Cafe. It was an event geared toward cultivating a culture of local support for area stores, shops and businesses. All was done in an effort to revitalize the East New York New Lots Business District.

The open mic featured up and coming spoken-word and musical artists. Bringing their power to the mic were artists such as Siphus Steele and Crimdella, along with Dilesha Walker Garcia and Sahir Wilson of East New York.

Brooklyn’s very own power couple, Assemblywoman Inez Barron and Councilman Charles Barron, who were also in attendance, graced the Word Up Café stage with a few of their rhymes. Each artist bought his or her own flavor and essence to the stage, with pieces about love, race and even the Brooklyn Renaissance.

Sharron J. Kennedy-Frost the owner of Word Up Cafe has created a refuge for creatives in the very heart of East New York. There the food is great, and so are the vibes. East New York Restoration likes to remind the inner city communities to “Keep it local!”